January 16, 2015
It's not the first time I've said this but here it goes again: it has been too long since I've shared a Fresh Fitted on here. I rarely seem to have a good excuse for not posting but I always have a solid reason to come back.

Case in point: this week's edition of Fresh Fitted Friday no doubt includes its namesake Fresh Fitted but as an added bonus to my readership, I'm going to begin this entry by including some imagery of a snapback brethren of said fitted. 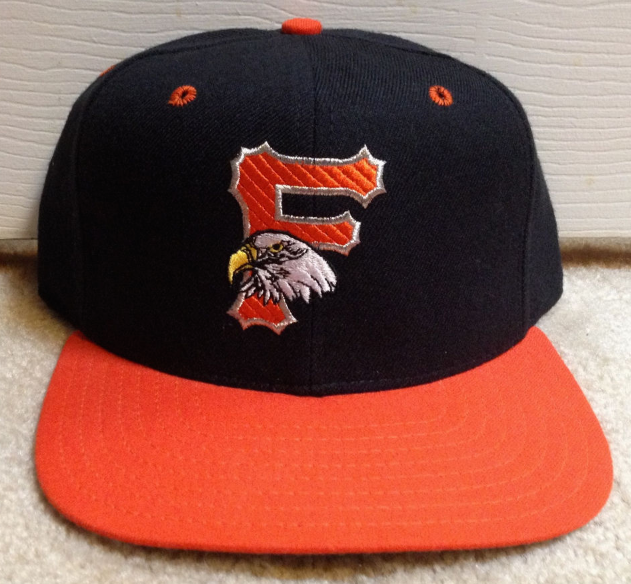 Are you bowing your head in reverence for the stoic fowl emblazoned across the "F" of this cap? I am and so have a great many fans of the Frederick Keys ever since their inception in 1992. 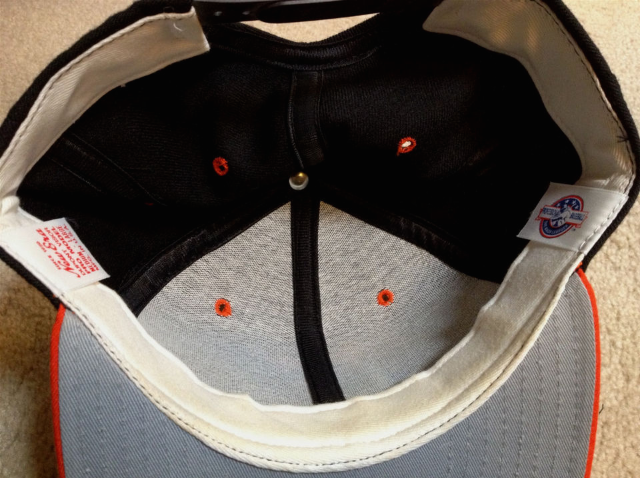 You'll notice the sweatband only bears two simple tags: the official New Era brand tag and the Professional Baseball tag. Conventional logic inspires me to rip off loose tags like these but for some reason, I feel compelled to leave them on. I'm probably just afraid that the feathered creature on the front will peck at my eyeballs if I mess with the nest. Just a guess though. 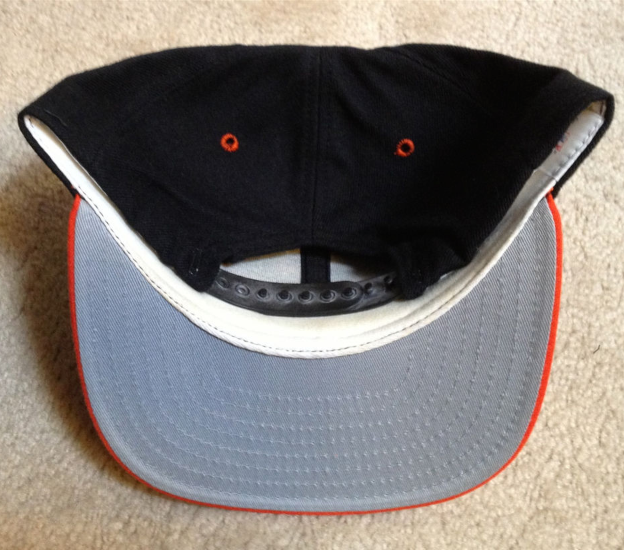 A perpetual head-scratcher for me is pondering why the bills on snapbacks from this era are oftentimes more squarish than their fitted counterparts. I'd reckon -at least in this cap's case- that it's done as a precautionary measure in the event of an arial attack, thus offering protection (albeit negligible) to the wearer's temples.

If the featured cap above instills terror in your mind, fear no more as the stark game on this snapback bears almost zero semblance to the anthropomorphic party animal on this beauty: 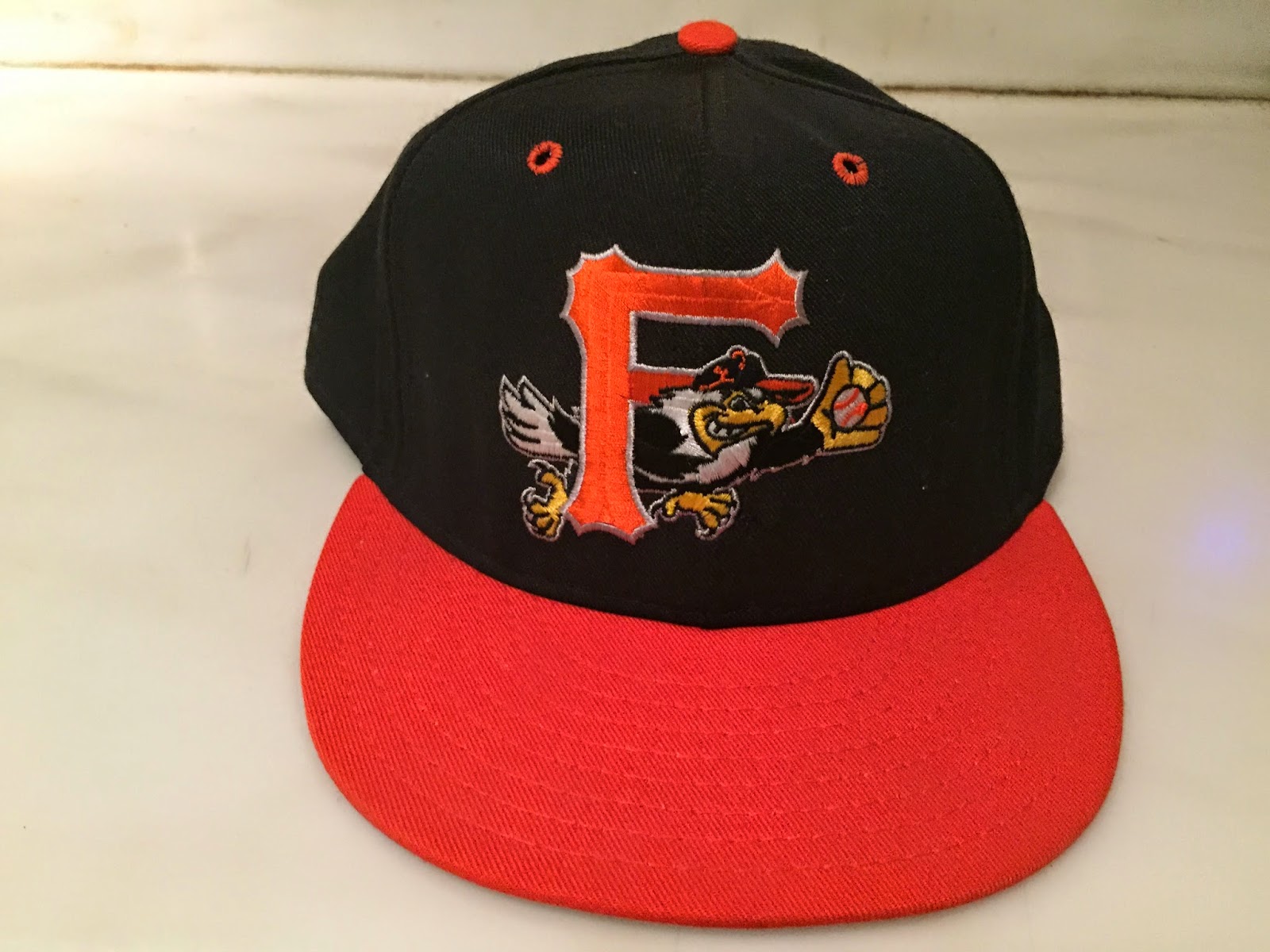 Now I must ask, who among you has a problem with a smiling avian who enjoys wearing ballcaps and catching balls in a fielder's glove? 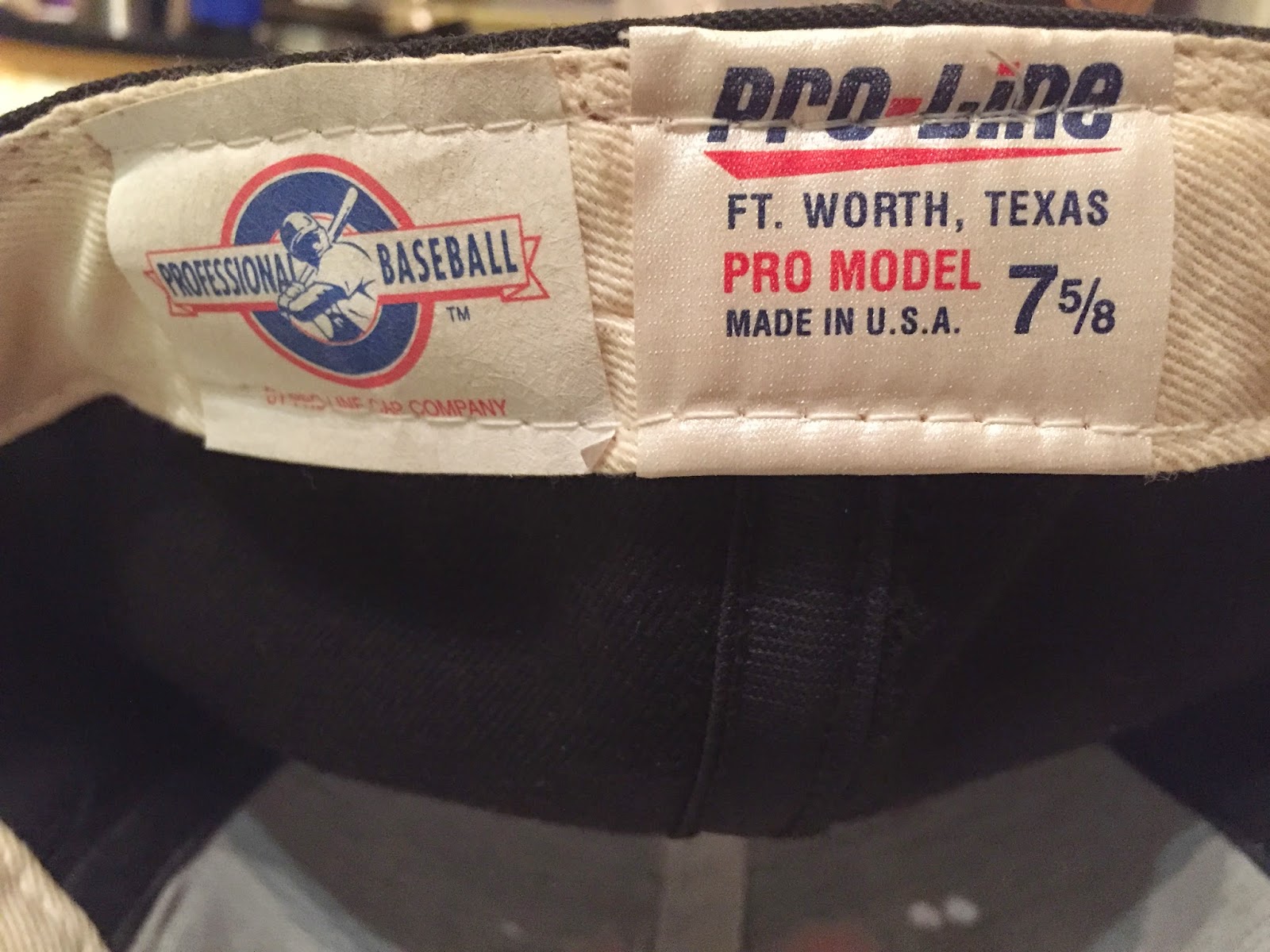 I certainly don't, nor do I have any beef with Pro-Line ballcaps. They are USA-made and there's a little sprinkling of Tejano pride in there because to this day, Pro-Line is still based in Ft. Worth, TX. 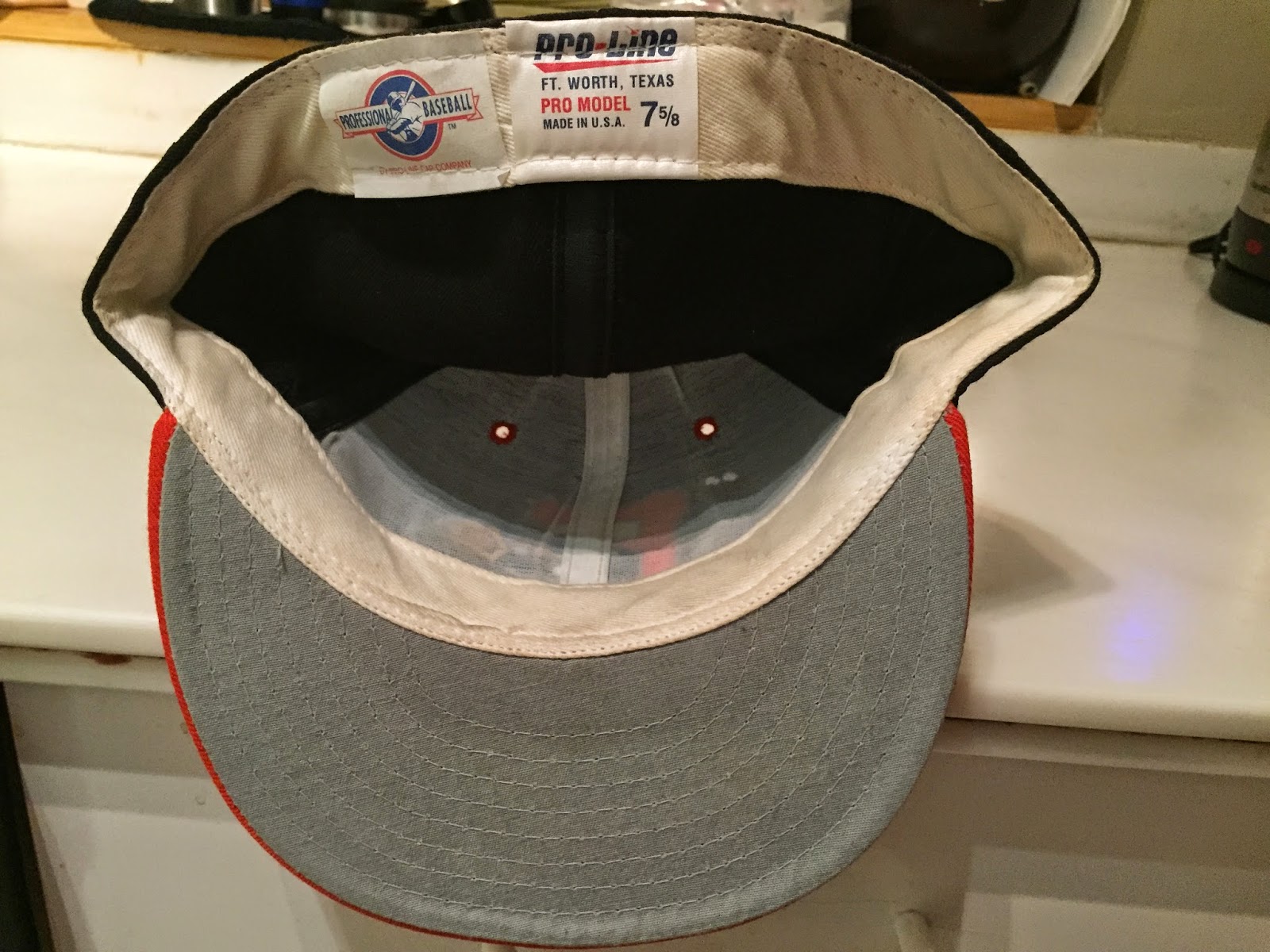 In contrast with the aforementioned cap, this cap's tags are double-stitched and the brim is more round in style. All tags will remain safely intact so there is no need for Ornithophobia to set in... at least for now. 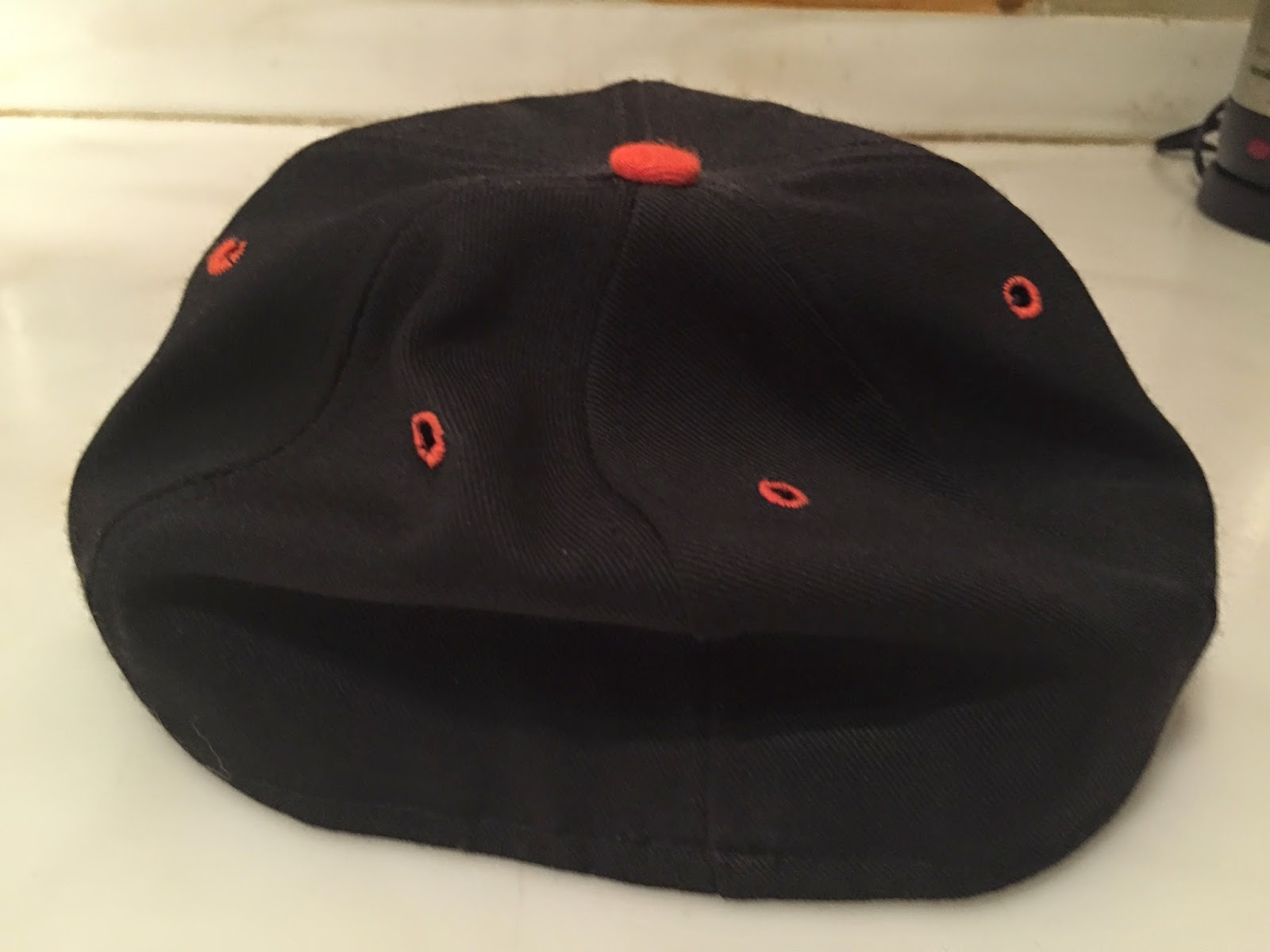 One thing that irritates me about the present-day Frederick Keys is that they have two mascots, neither of which is part of a winged flock. For some unknown reason, one is a coyote (?!?!) named "Keynote" while the second mascot is an ambulatory blow-up doll called "Frank Key" who is named in honor of Frederick County's most famous (I think) native, Francis Scott Key. Feast your eyes on this horror:


It's so depressing to see historical figures getting the short end of the stick like Key does here. Hopefully they at least close his mouth in a future iteration. I suppose if you want to enjoy something volary-related, then check out the 45:57 mark of this video to watch Phish's Halloween 2014 performance of a song titled "The Birds" at the MGM Grand Arena in Las Vegas, NV:

As a minor league affiliate for the nearby Baltimore Orioles, the Keys have enjoyed a symbiotic relationship with their parent team over the years. Current Orioles stars such as Manny Machado and Matt Weiters are among those who got their professional start in Frederick and in turn, the Keys have also clearly borrowed from the big league club.

This is true at least in regards to the two teams sharing the same colorway for caps and uniforms, even though the Keys are currently flying birdless. While the surly bird featured on this vintage Keys snapback might be way more pissy than the more gregarious version that the O's currently employs, there was a time when The Oriole Bird wasn't so jolly. I'll close by encouraging those who are intrigued by such dichotomies to visit this page to learn more about the evolution of the Orioles cap logo and its correlation with mood swings among flying vertebrates!

I've got one more treat for y'all. In honor of Francis Scott Key's authorship of the Star Spangled Banner, here is a video of of Metallica performing it before a San Francisco Giants game: