November 20, 2015
The team logo for the Scottsdale Scorpions might not be widely recognized by most casual baseball fans but die-hard San Francisco Giants fans sure know it when they see it.

Major League Baseball's teams typically send their top prospects to varying Fall League teams every year but the Giants have consistently sent their top prospects to Scottsdale since the 2006 season and possibly before. The first few current Giants who are Scorpions alumni that come to mind for me are Buster Posey and Brandon Crawford who both played for Scottsdale in 2009.


I wish I could share some fun relics of Posey and Crawford as Scorpions from yesteryear but all the photos I found had watermarks on them and it turns out nobody likes watermarks anyway. Thanks to all things good and holy, Fox Sports isn't stingy with its images, especially this one of Bryce Harper and Mike Trout when they were both part of 2011's Scottsdale Scorpions class.

As much fun as it must have been to watch the 2011 team in action, the 1994 Scorpions have the distinction of featuring (who I consider to be) the most widely recognized athlete of all-time: Michael Jordan.


After leading the Chicago Bulls to their third straight world championship, Jordan retired from basketball in October of 1993. This decision led to his desire to pursue a career in professional baseball the following spring. His modest performance at the Chicago White Sox Spring Training camp earned him an assignment to their Double-A affiliate, the Birmingham Barons. At the conclusion of that league's regular season MJ then headed to Scottsdale to put more time into honing his skills in the Arizona Fall League circuit.


It is a known fact that the strike-shortened 1994 baseball season is possibly still a sore subject for the many baseball fans who remember it, myself included. It ultimately did not matter if you sided with the owners or the players on the issue because the end result was that the 1994 season was never finished.


It should be noted that the 1994 Minor League Baseball was not affected by the strike which is why Jordan was able to play a full season of professional baseball that year. His greatest desire was to play at the MLB level but he was clear in that he did not want to do so as a replacement player for the 1995 season. Once he completed his Arizona Fall League stint, MJ decided it was time to hang up his baseball cleats and lace up his -ahem- Air Jordan X's.


Of course MJ looked amazing in every iteration of his signature shoe but the most iconic pair has to be the Air Jordan XI which is the shoe he wore in the first full season of his return to basketball. As many of us know he would end up leading the 1995-96 Chicago Bulls to their first of three consecutive championships -and for the second time, to boot- so let's take a moment to appreciate the "Bred" (Black and Red) colorway of the Air Jordan XI shoes that I believe pair best with the Scottsdale Scorpions cap: 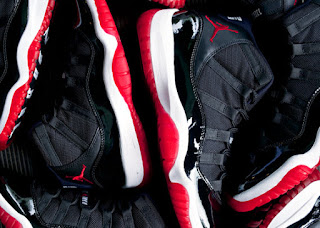 While Jordan's professional baseball career might have only lasted for one season, what he did in that time will always amaze me. To put it into context, Jordan was 31 years old and went from having only amateur-level baseball experience to competing with professional ballplayers who for years had done nothing but eat, sleep and dream baseball when not playing the game.

The fact that he did not wow us with heroics on the baseball diamond like he did for so many years prior on the basketball court is simply not the way to describe Jordan's impactful 1994 baseball season. It's true that by baseball standards, he was mediocre but when you consider what it takes for a player to even reach the Double-A level, what Jordan accomplished is a mind-blowing achievement.

In closing, I would just like to wish the Scottsdale Scorpions luck as they prepare to take on the Surprise Saguaros in the 2015 AFL Championship on Saturday, November 21. I know that I'll be watching the game at home so hopefully some of you tune in as well.

Also, I'd like to invite you to follow this link if you are interested in reading a great article that goes into greater depth regarding Michael Jordan's path in baseball!