The news definitely prompted my selection for last week's Fresh Fitted and it definitely has a role in this one’s as well, which - please Hammers, don’t hurt me - is actually a snapback of the Myrtle Beach Pelicans from the 2002 season.

One thing about bringing up the Myrtle Beach Pelicans reminded me that I had a Pelicans cap squirreled away that I’d never worn so that’s why I’m busting it out now. Like the Lake Monsters Cap from last week, the design on this cap is the one that was used before Brandiose worked their magic on it. In comparison to other redesigns that Brandiose has done, the logo on this week’s featured cap doesn’t vary too much from what they are using currently: 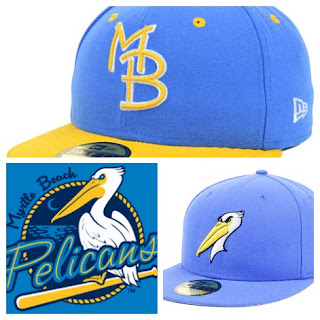 I love what Brandiose came up with for the Tides, but in retrospect I think this type of subtle change could also have been a good strategy to use for the Tides' campaign. In the Pelicans' case rounding out the font lettering, lightening up the yellow and swapping out the tired teal for a bright Carolina Blue elevated the style in a safe but bold manner.

When I first heard of the partnership between Brandiose and the Norfolk Tides, it seemed like a dream come true that a firm that I respect so much would work with the team that I grew up watching. That bliss would not last as the salty reactions to the new look embarrassed me to the point that I felt implored to apologize to Brandiose on behalf of those “fans" although I resisted that urge in the end. The chastising continues on social media, however I am grateful that mediums such as Facebook and Twitter are not simply one-way sounding boards for disgruntled fans.

Here is a video of the Tides front-office staff having fun reading “mean tweets” that were sent after the new logo was announced. By the way, they offered tickets to anyone whose comment was featured in the video.

I feel it was just too easy for these Tides fans to rip on the team’s ownership for making changes to something that they didn’t feel the needed to be changed. Ken Young, who is the Tides’ current managing partner, is someone that I respect immensely for the positive impact he's had on the Tides and the other teams he runs (Frederick Keyes and Albuquerque Isotopes) and I think the Tides fans are too shortsighted right now to fully understand his vision.

Time and time again, Mr. Young has demonstrated keen business acumen and I believe he shares a lot of traits with Chuck Greenberg, who serves in a similar role with the Pelicans as well as the Altoona Curve, State College Spikes and the Frisco RoughRiders. Interestingly enough, Brandiose has worked on the logos for all three of those teams as well. I’ve got a RoughRiders cap on my wishlist at MLB.com but I won’t say which one…OK, I’ve got all of them on there. 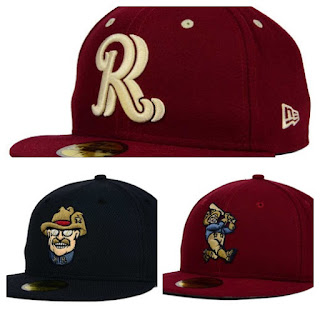 All this talk of rebranding has got me looking forward to the 2016 baseball season but sadly we are still a few months away from its arrival. In the meantime I’m looking forward to picking up and writing about a few more hats (like the new Norfolk Tides hat, duh!) that I’ll hopefully get to wear to a few Tides games this summer. I’m also looking to see if I can make a trip to see the Pelicans play at Pelican Park in Myrtle Beach sometime soon so I’ll let you know about that as well.

As always, thanks for coming back to read about baseball hat geekery. I've got comments disabled here so please feel free to reach out via any of the following social sites: