February 01, 2019
I realize that not all of my readers are football fans but I really do think most of y'all are at least a little pumped up for the Super Series, er, World Bowl, um, I mean Super Bowl this weekend. I'm obviously more of a baseball fan but I do enjoy watching "The Big Game" with friends plus you can't deny the awesomeness of the food at Super Bowl parties.

The dilemma for this year's Super Bowl matchup is almost as bad as what I faced during the 2018 World Series: having to make a decision on whether to root for Boston or Los Angeles is nauseating for a resident of New York City who is a fan of San Francisco teams.

I'm not a die-hard 49ers fan but they share a division with the Los Angeles Rams and besides, I can't fathom ever rooting for any team from LA. Thus the New England Patriots are my team this time around even though they are division rivals to the Buffalo Bills, which is the team that I have half-heartedly followed ever since moving to New York in 2010.

I decided because I'm a Pats fan this weekend that I should write about a New England team but only if it fulfills the requirement of having a connection to the Carolina League theme that I'm running here and this Lynchburg Red Sox hat does just that! 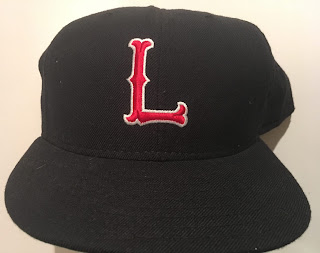 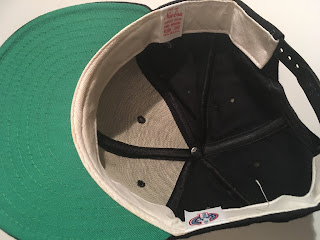 The city of Lynchburg lies in the foothills of Virginia's Blue Ridge Mountains and has hosted minor league baseball ever year since 1963. They've had many parent teams over the years but I'll always remember them as being farm teams for the New York Mets and the Boston Red Sox.

Going by the tags and green underbrim I'd guess this hat is from the earlier years of their Red Sox affiliation, which spanned from 1988 through 1994.

The lighting isn't great in the images above but I'm rather convinced that the underbrim is green in the Tim McGee (L) card and that the Paul Rappoli (C) and Luis Ortiz (L) cards from 1992 feature caps with grey underbrims.

Of course, teams might have alternated between the two different styles but to me, green is synonymous with the former so that's what I'm going with for my estimate of what year this cap is from.

Because of my loyalty to New York City, I probably won't be wearing this cap so I'm thinking of putting it on the Trading Block in hopes of attaining one of the more rare caps in my wishlist in which case please do not hesitate to reach out if you want this or any other cap from that list and you are willing to part with any of the hats on my Wish List.