August 30, 2019
Welcome to the last post of the 2019 New York-Penn League celebration! I began the series with the primary cap worn by the Staten Island Yankees when they suit up as the "Pizza Rats" so I'm bookending it with the "NYC" cap.

I was hoping to catch a "Pizza Rats" theme night this year but sadly, that did not happen. Rats! The one game I saw this season was this past Wednesday night as the team played under its usual moniker and this week's cap is the one I wore to the game. 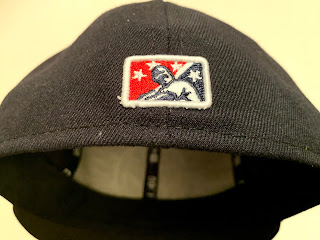 My Baby Bombers experience this week reinforced my preference for attending games at Richmond County Bank Ballpark over any other stadium in the five boroughs. What I love most about games at Staten Island is that I can hop on a free ferry a few blocks away from my office that will drop me off within steps of the ballpark.

I've also grown tired of the aggressive security policies at Yankee Stadium. I know their rules are there to protect fans but it's ridiculous that bicycle helmets are on the list of prohibited items considering they sell helmets there. If I really wanted to use one as a weapon, a simple and legal transaction would do the trick.

I ride a bike in New York City every single day so my helmet is always with me. If I bring it along on the subway up to the Bronx for a Yankees game, I have to pay to store it in a locker at some sketchy shop across the street from the ballpark which is a total inconvenience.

The Staten Island Yankees do not have such rigid guidelines for entering the park. In fact, a bicycle helmet was given away as a gift to a fan during an in-game promotion at the game I attended last Wednesday. "Safety First" were the very words spoken by the announcer as the helmet was handed over. The irony is palpable.

Just like the first installment of this New York-Penn League series, this week's cap was an in-stadium pick-up and gift from my wife, who is a big supporter of this blog so there's no way this would ever go on the Trading Block however let me know if there's something you must have from there and are willing to part with any of the hats on my Wish List.