October 04, 2019
Last week I mentioned I was running low on Southern League caps so it's no surprise that I'm stretching a bit for this week's Fresh Fitted Friday. As you probably know, most of my posts are on-field caps, but this week's Jacksonville Suns cap is a replica of the cap worn in 1968, which to make things worse is when they competed in the International League.

The 1968 Suns cap is significant to me for a number of reasons but at the top of the list is  it's the last one the team wore before they became the Tidewater Tides upon moving to my hometown of Norfolk, VA in 1969. Another thing I love about this cap is its esoteric logo ensures that only knowledgeable Mets fans will comment on it.

I purchased this cap as soon as Ebbets Field Flannels released it this past March with the intention of wearing it to a Mets game this season and that opportunity came this past Saturday, which turned out to be a historic evening as Pete Alonso broke the single-season rookie record with his 53rd home run of the year.

Now that I've got my hands on a Jacksonville Suns from the Mets era, I think the only one I have a desire to obtain is the Jacksonville Braves cap, which I'm hoping Ebbets Field Flannels will retro again some day. Besides that one, I'm also intrigued by this 1970 retro, which at the time of writing, the Jacksonville Jumbo Shrimp had for sale on their site: 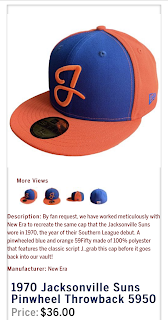 The cap is described as being "meticulously" crafted to resemble the cap worn in 1970, which incidentally was the year the Suns joined the Southern League, however the New Era flag on the wearer's left and MILB batterman argue to the contrary. I'm also not a big fan of the orange stitching on the blue panels but hopefully that doesn't look as jarring in person. 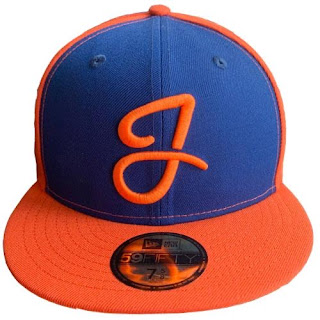 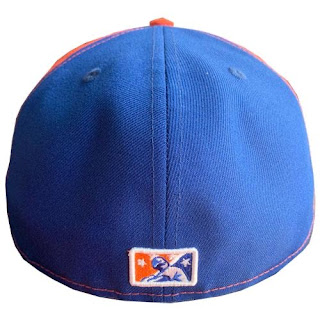 I'm assuming the Jumbo Shrimp's marketing team did the proper research for this cap release but it's hard to validate against any sources online. I'll keep a lookout for any photos of the 1970 Suns so that I can properly compare the caps. Either way, I appreciate the Jumbo Shrimps efforts in attempting to retro a cap that was only worn for one season!