October 06, 2017
Now that the 2017 regular season has ended, my torture endured as a San Francisco Giants fan is over—what's say you? The Los Angeles Dodgers are favorites to win the National League pennant? My bitter rivals!?!? Nooooooo! I suppose my only defense is to jinx them by showcasing this vintage cap from the Ogden Raptors who are a longtime Dodgers minor league affiliate.

I know my last attempt to mush the Dodgers didn't work however you don't understand the power of a hat from 2004. The New York Yankees had the best record in the American League that year yet lost in the ALCS to the Red Sox despite having a 3-0 lead in the series. My guess is this upset was spawned by bad juju performed by a Yankees hater. 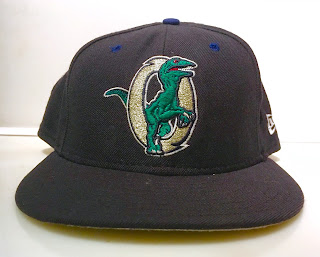 When the Ogden Raptors cap logo debuted in 1994, it fit in well with the other kid-friendly cartoonish logos being used at the time. Fast forward ten years and the team still used a similar logo for this cap. The dark navy seen here has been replaced with the blue. At the very least you have to give the Raptors credit for sticking to the message. 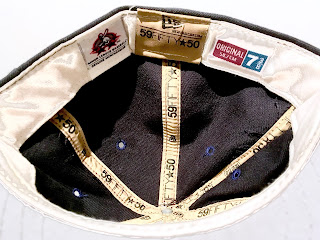 The special gold taping is to commemorate the 50th anniversary of the 59Fifty cap which came out in 1954. Get it? Gold taping for the Golden Anniversary! Would you have preferred they celebrate the 59th anniversary instead? Well, we regret to inform you that New Era did not consult first with real fans such as you or me so we must carry on! 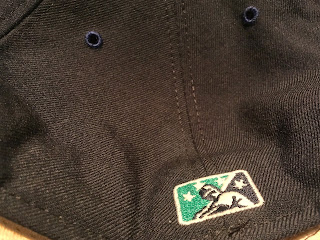 I love the color green so I appreciate that it is the prominent hue in the MILB batterman here. I could keep this cap as a reference to what the 50th anniversary caps looked like however I think it should go on the Trading Block because I'm sure someone out there is looking for a rarity such as this one and is willing to part with one of the caps on my Wish List.


I hope you enjoyed these photos of my Ogden Raptors cap. By next week we'll know if my latest attempt at sorcery worked in eliminating the Dodgers from further playoff splendor!