December 15, 2017
Trend alert! So for the third straight week we are looking at a Class A Short Season team however unlike the last few posts, this week the team is not from the New York-Penn League but rather its west coast counterpart. 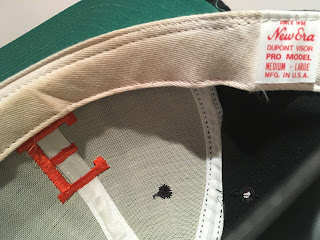 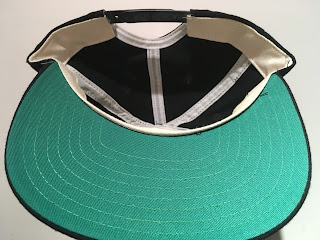 The only images I've found of an Everett Giants player wearing this version of the cap are in the black and white photographs used for the baseball cards from the 1984 Cramer set and I think I see some discrepancies between these two caps.

I'm at loss as to why a black and white photo was used for a baseball card as recently as 1984 but, alas. Side note: I have a friend who is coincidentally is a photographer and has the last name Olker but he is unlikely to read this as he is not a big baseball fan.


After giving this some thought, I believe I should attribute these variances to the possibility that there were simply multiple versions of the Everett Giants hat. The San Francisco Giants and their farms were typically early proponents of the grey underbrim but that wasn't always the case as we've seen before.

As I said earlier, I've only seen images of this cap on cards from the 1984 team set but I doubt it could be from any team other than the Everett Giants. Evansville Triplets? Hardly! I searched far and wide and unless this was a random college or high school cap, the Everett Giants wore it so if anyone has a question, comment or concern please fire away!