December 07, 2018
I thought about writing about another Buffalo Bisons hat this week but I don't think that will do much to alleviate my sadness regarding New Era closing its Derby plant. Instead I think I should focus on another legendary International League team from Western New York like the Rochester Red Wings.

As I've mentioned before, my hometown team growing up was the Norfolk Tides and I got to see a lot of games against the Red Wings who were affiliated with the Baltimore Orioles during those years. Something interesting I just found out about Rochester is that the "Flour City" has been a charter member of the league since its earliest incarnation in 1886!

Like all minor league teams in the late 19th century, the first Rochester squads were all independent clubs however another thing I learned recently is that moniker is likely derived from the fact that their first major league affiliation which was with the St. Louis Cardinals which lasted from 1929 through 1960 and explains why the name stuck for so long.

From 1961 through 2002, Rochester was affiliated with the Baltimore Orioles and that first season would have been the perfect opportunity to rebrand as the Rochester Robins so both clubs could share orange and black colorways. As it's rare now for any minor league team not to have a crazy name, my Rochester Robins vision will likely never happen.

I like that the Rochester Red Wings are all about holding on to tradition. It shows commitment to honoring the past which is important when building a long-lasting baseball brand. Case in point is the Burly Bird cap logo that the team has worn from 1997 until current day. This week's cap is the road cap which with a red crown and black bill. 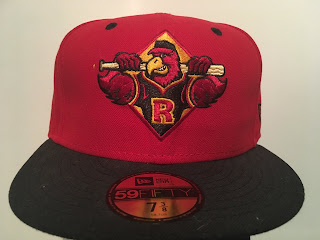 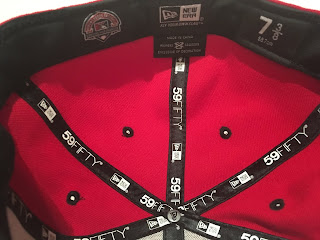 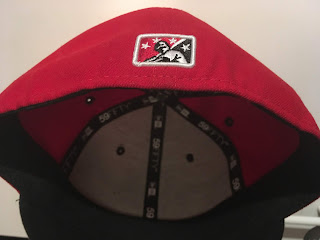 This particular cap features a Made In China tag which sort of rubs salt into the exact wound that New Era Cap fans are trying to heal. Just to clear the air for hopefully the last time, my gripe with the caps made overseas has less to do with quality as I personally do not have the ability to distinguish between those hats and their domestic counterparts.

My issue with the Derby plant's closing is that it means New Era is essentially now just a marketing company based in Buffalo and that it's left over 200 hard-working folks out of a job. I've heard chatter that other businesses in the region are looking to hire the soon-to-be displaced factory workers but time will tell how much of that actually comes to fruition.

As much as I dig this cap logo, I'm not really a big fan of red caps so this one is going to have to go on the Trading Block so please don't hesitate to reach out if you want this or any other cap from that list and you are willing to part with any of the hats on my Wish List.