March 15, 2019
Today's date is March 15 and this day is always a special one for me as it marks the anniversary of my move from the Bay Area to New York City. While it commemorates a major life event for me personally, March 15 is one of the most infamous dates in all of history and it even has an ominous saying to accompany it: "Beware the Ides of March."

As you can imagine, I had difficulties finding a South Atlantic League hat with some kind of connection to Julius Caesar but alas I stumbled upon an Augusta GreenJackets cap that I had not yet written about. 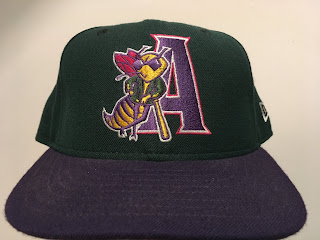 It's common knowledge that the city of Augusta in the US state of Georgia was named for Princess Augusta of Saxe-Gotha, but the etymology of her given name dates back to Augustus of Prima Porta, who for those who need reminding was Julius Caesar's adopted son and thus the eventual and rightful heir to the Roman Empire.

Anyway, enough with the super fun history lesson; let's talk about this classic cap logo!
If you look back through my old posts (again with the history stuff) you'll find that I wrote about a Pro-Line version of this cap back in 2011...in the month of August! I apologize about my corniness today, as well as my shoddy camera work eight years ago.

At any rate, the GreenJackets wore this logo from their inaugural season in 1994 until 2005 which in my opinion makes it a classic in terms of minor league cap history. (I'm sorry I keep using that word, y'all.) 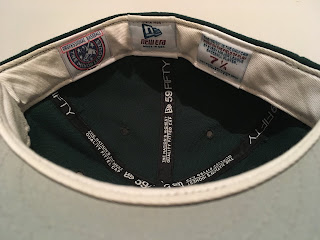 The sweatband tags here are of the late 1990's/early 2000's variety but the earliest this cap could be from is 1999 because of the New Era flag on the side of the cap. The latest it could be from is 2001 due to the fact that New Era started implementing the burgundy and cyan size tags that season, at least that was the case for the MLB caps it produced. 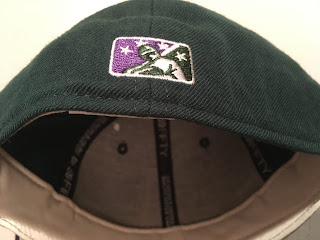 As much as I love this cap logo, it's too small for my noggin so it's going on the Trading Block. Please don't hesitate to reach out if you want this or any other cap from that list and you are willing to part with any of the caps on my Wish List.