May 17, 2019
Something I enjoy doing with this blog is reflecting on previous posts while working on new ones. This week's Fayetteville Generals cap not only harks back to a Generals snapback that I wrote about just over two years ago but it also relates to the Lakewood BlueClaws which was the first team featured in this run of South Atlantic League caps.

What I appreciate most about the Generals logo is that it pays tribute to a legendary figure of the American Revolutionary War from France named Marie-Joseph Paul Yves Roch Gilbert du Motier de Lafayette, or as he's more commonly known, Marquis de Lafayette. 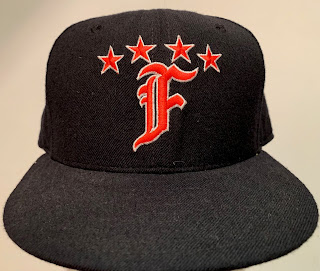 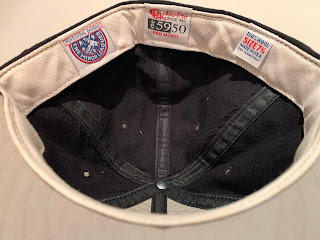 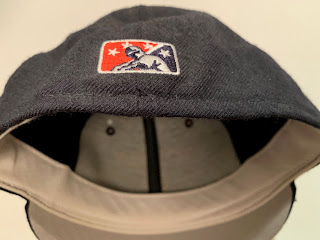 Not only is the team's name derived from his role as a major general of American forces in the war but the city of Fayetteville, NC is also named in Lafayette's honor. I should have mentioned this information when I wrote about the Generals snapback in 2017 but I'm glad to be able to right this wrong now.

One wrong that can't be righted now however is how the Generals rebranded as the Cape Fear Crocs when they became affiliated with the Montreal Expos in 1997. To me it seemed like the perfect opportunity to create a uniquely new identity based on Fayetteville's French origins along with some French Canadian imagery of their new parent team in Montreal.

Sadly though the Crocs rebrand was a very Poochie moment in MILB history and in case you were wondering, I am aware that I've referenced Poochie on here before! At any rate, the Crocs experiment only lasted until 2001 which is when the team became affiliated with the Philadelphia Phillies and moved to Lakewood, NJ to become the BlueClaws.

As I close out the final chapter of this long-running South Atlantic League mini-series, I've got Boyz II Men's "It's So Hard to Say Goodbye to Yesterday" playing in my mind while reminiscing over all the fun caps I've written about over the past few months.

The big takeaway from all this is I'm noticing just how many Sally League caps I own, which makes sense due to me being from the South but also because some of the most iconic MILB cap logos —in my opinion— are South Atlantic League teams.

People sometimes ask me what my all-time favorite cap is and while I don't have a set answer, what immediately comes to mind are the different styles of Asheville Tourists and Augusta GreenJackets caps as well as former teams like the Charleston Rainbows and Greensboro Hornets.

I'm also thinking my Sally League collection simply correlates with the high turnover rate that the league has experienced over the years, especially compared to the Carolina League's steady membership. Still though, of the 14 teams currently in the league there are only 5 that I haven't written about while some teams I've written about multiple times.

I only need one Fayetteville Generals cap in my collection so I've decided to put both the snapback and the fitted on Trading Block in hopes that someone out there wants one of them and is willing to part with one of the hats on my Wish List.