May 10, 2019
The South Atlantic League celebraish officially "goes to 11" today and I think I'll be wrapping up the series next week as I'm sure everyone is about ready for a new topic. Until then, let's talk about this sweet 1980's Asheville Tourists cap which is all about simplicity —while perhaps even teetering on the edge of basic— although is a classic nonetheless. 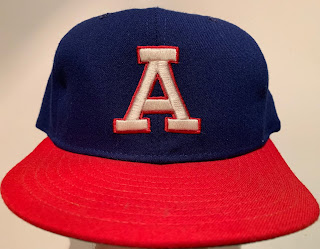 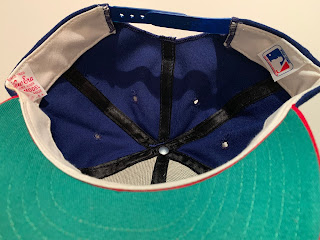 A cursory glance of Tourists cards from 1986 and 1987 shows players wearing hats with this week's logo and on a royal blue crown, albeit with a grey underbrim, unlike this week's cap. The navy crown seen on this 1989-93 Asheville Tourists hat I wrote about just a little over two years ago proves this cap is from no later than 1988.

I had troubling finding Asheville Tourists baseball cards from 1981 through 1985 so I can't say with certainty the earliest year this cap could be from. The closest thing I could find is this image of former Houston Astros pitcher Charlie Kerfield as a member of the 1983 team wearing one that resembles this week's cap.


In case you were wondering what Kerfeld is up to lately, I have no idea...but I did find this Boston Herald article from 2015 when he was a special assistant to the general manager of the Phillies. It discusses a potential trade between Boston and Philadelphia where the Red Sox would have sent then-prospects Mookie Betts and Blake Swihart to the Phillies in exchange for either Cole Hamels or Cliff Lee. In retrospect, that would have been an INSANE come-up for the Phillies no matter which pitcher they gave up.

Because this hat is so similar to the aforementioned 1989-93 Tourists hat, I might as well put it on Trading Block in the hopes that someone out there wants it and is willing to part with one of the hats on my Wish List.