March 31, 2017
Last week's Tucson Toros cap must have sparked something in me because I'm featuring a classic farm team that was once associated with the Houston Astros here again this week. My intrigue with the Asheville Tourists began when I first became interested in minor league baseball in the early 1990's and the logo on the cap showcased today is from that time.

I'm really glad to have found this cap and to be write about it today. Not only was this the first logo that I associated with the Tourists but I think my appreciation of it might have something to do with the slab serif typeface on the "A" resembling the cap logo worn by "Coach Harris" —played by John Goodman— in Revenge of the Nerds: 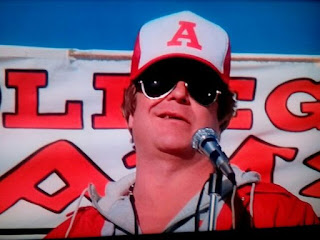 If the cap worn by "Coach Harris" is familiar to you then that is because you've seen the font used in that "A" somewhere else. Here's a clue: most of the footage of the college grounds from "Adams College" —the fictitious campus in Revenge of the Nerds— was shot in the environs of the University of Arizona in Tucson.

So now it's time for me to tell you how this all ties in together. Last week, I wrote about the Tucson Toros as the Arizona Wildcats had just been eliminated from the "Sweet 16" of the NCAA Men's Basketball Tournament. I also wanted to denote the last full week of MLB's Spring Training since obviously half of the games are played in the Grand Canyon State.

With less than a handful of exhibition games left to be played in Arizona, the time is right for bold predictions stemming from the connection between Arizona, U of A and the former Astros minor league caps from the past two weeks: The Houston Astros will win the AL Pennant in 2017 and the Arizona Diamondbacks will become a Triple-A team in 2018.

Ok, the second thing is not happening but the Dbacks are a terrible franchise and not just because I'm a San Francisco Giants fan. In my opinion, Arizona should be home to Spring Training, a Triple-A team, and a Winter League for prospects similar to the Arizona Fall League. If the Winter League happens, I might move there just to have year-round baseball.

If you are browsing this page on a desktop machine, check out the social links on the right and if you are on a mobile device, click these links below: