July 13, 2017
I'm conflicted about the All Star Break. On one hand, I like that teams get a chance to take a breather before ramping up for playoff runs, or in the case of my San Francisco Giants, a brief respite from a season that is a complete disaster. And then on the other hand, I really don't like being without baseball (especially fantasy) even if it's for a few short days.

One thing I do like about the break is the All Star Game, although this one was annoying because it was the first year in which the ASG patch shifted to the wearer's right side as the New Era flag is now mandatory on every official on-field cap. Some don't mind it but I find it distracting so I'm not going to buy any of the ASG caps unless they're on clearance.

Because I miss the glory days when teams were not forced to blatantly advertise the companies that manufacture their uniforms, I decided to take a break from writing about Minor League caps to showcase a few of the MLB hats that were included in The Great eBay Haul that do not have New Era flags on the side of the cap. I bet you thought I forgot I had 40+ hats left to write about. Well, I didn't forget! 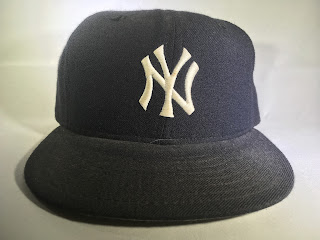 If you look closely at the cap logo here, you'll notice it's the thinner version the Yankees wore before New Era began raising the embroidery in 1996. I'm almost always guilty of being overly nostalgic about everything concerning baseball caps but please agree with me that the thin and flat logos are the best! It's just too bad this 7 1/4 cap is one size too small. 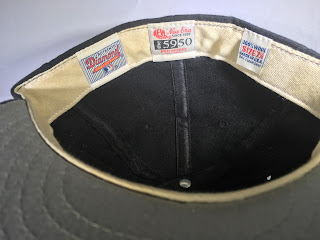 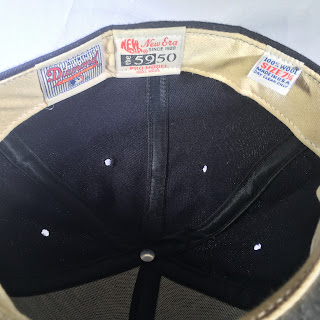 No surprises here but the sweatband tags (and yes I know the sweatband is not pristine here) are consistent with other caps that I've shown from 1994 and 1995 but the "Authentic Diamond Collection" tag is a dark blue that more closely resembles the coloration of the tag from 1996 to 1998. Because of this, I can confidently state that this cap fits the bill of one that was likely made and worn in 1995. 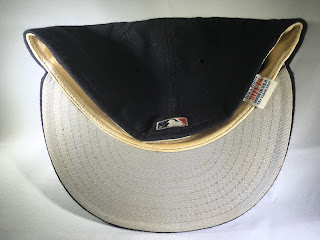 Because this cap is a bit too small for me, it's going on the Trading Block as I'm hoping someone out there is looking for an old school classic such as this one and is willing to part with one of the caps on my Wish List.