July 19, 2017
This week's Fresh Fitted is another one from The Great eBay Haul but this one is different in that it's not too small for me to wear. It is, however, too big by a size or two but the fact I red hats aren't my jam means that I'll probably end up trading it for something I'd actually wear. If not, it would be nice to have a vintage cap like this one around for research. 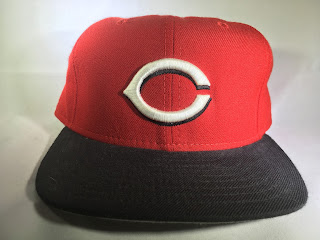 I've mentioned before how in addition to staying away from red caps, I have a general rule against wearing MLB caps in NYC, other than of course rocking a Yankees hat to Yankee Stadium. I think I avoid MLB caps because I don't want to mislead tourists from that team's city into thinking they can ask me for directions. I'm a bad person. 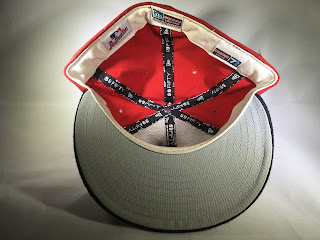 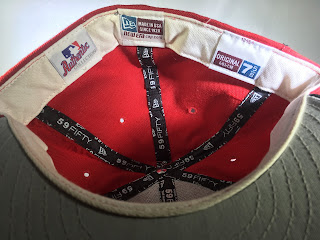 Assigning a specific year to this cap might seem like a hard row to hoe but it really isn't. The sweatband tags could be from anywhere between 2001 to 2004 but I'm going to guess this cap is from either 2001 or 2002 based on the satin taping being a style that was used no later than 2002. Isn't this game fun?!? 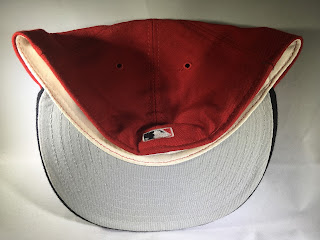 Y'all have heard this ad nauseam already but it's worth repeating I'm not really a big fan of red caps so this one is going on the Trading Block because I'm sure someone out there is looking for a vintage gem such as this one and is willing to part with one of the caps on my Wish List.