July 19, 2019
The second half of the 2019 MLB season is under way and I've decided I need to start going to some more games before the season's end. I started this year off strong but the only time I got to the ballpark last month was on June 4th when the Giants tallied up six runs in the top of the 10th inning against the Mets at CitiField.

I left after the top of the 9th because I was certain the Mets would walk it off—which they did not—and I'm glad I was wrong! My most recent attempt to get to a game was for the Rays-Yankees matchup this past Wednesday, which I learned was postponed due to "severe inclement weather" as I was riding the subway up to the Bronx.

Maybe this most recent misadventure is a sign that I need to switch it up a little. I'm thinking I should catch some Staten Island Yankees games where I can proudly sport this week's Fresh Fitted Friday selection, which I believe is the primary cap the team will be wearing on their Pizza Rats-themed games this season. 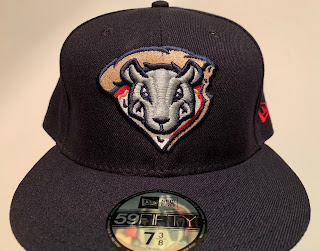 This is an interesting logo because the rat doesn't look like the ones I'm used to seeing here in New York nor does the pizza seem like the usual slice either.

As if it wasn't obvious off the bat, Brandiose designed the "Pizza Rats" identity for Staten Island which explains the surly rat in the logo as well as the more subtle touch of the pizza in the background being in the shape of Staten Island's map outline, which is sometimes said (by me) to resemble a slice of pizza. 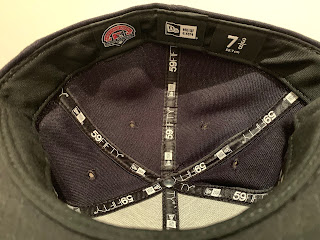 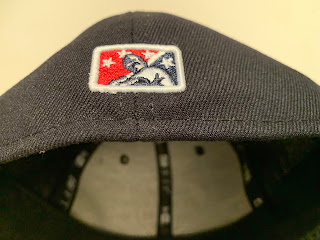 Nothing to note regarding the sweatband tags and MILB batterman on the back of the cap as they are all pretty standard issue. The real magic of this hat lies in the story of how after the 2016 season, the fans in Staten Island collectively latched on to the idea of naming a team after a then year-old meme.

It's uncommon for a meme to be discussed for more than a few days but somehow almost three years after the infamous Pizza Rat video first surfaced on Youtube, there's now a minor league baseball team that identifies with the rat enough to temporarily rename itself after it.

Sadly, that the rebrand didn't happen in time for the 2017 season but the team managed to play five games as the Pizza Rats over the course of five games throughout the 2018 season. If you'd like an in-depth account of how this rebrand came to be, check out this this excellent write-up by Tim Newcomb for SportsLogos.net.

I love the Pizza Rats logo but as a hip-hop fan, I feel a stronger connection to the Staten Island Killer Bees even though the name doesn't exactly roll off the tongue. A big reason why I think this name can't work is because of the artistic and monetary complications tied into appropriating the imagery that was made famous by the Wu-Tang Clan.

I personally think the team would have been wise to consider a nautically-themed name. My top choice would have been the "Staten Island Spinnakers" because it's a modest boat type that befits the entry-level minor league team for the New York Yankees which of course by comparison would be a luxury yacht. Hmm...The New York Yachtyees?

Another approach would be to keep it simple by calling themselves the "Staten Island Sailors". It's has the alliteration like the previous name, but it's also got a blue-collar vibe and the residents of Staten Island are known to be especially proud of that character trait.

One final name that would work is the "Staten Island Starboards". The "starboard" refers to the entire right side of the boat and it's often said that doing things the "Yankee Way" is to do them the right way. Also, the word "star" is a nice touch as I believe most of the players in Staten Island dream of one day being star players for the New York Yankees.

This week's cap was an in-stadium pick-up and gift from my wife, who is a big supporter of me doing this blog and my hat obsession in general. There's no way a present like this would ever go on the Trading Block however let me know if there's something you must have from there and are willing to part with any of the hats on my Wish List.

Update: As I was writing this post, I was listening to the Mets and Giants broadcast of the first game in their second and final series of the season which this time of course was happening at Oracle Park in San Francisco.

By the time I decided go to bed, they were tied-up in the 13th and I learned upon waking up this morning that the Mets eventually scored a go-ahead run in the top of the 16th and that the Giants came back to score two runs in the bottom of the inning to walk it off.

This coincidence now truly confirms my notion that I need to go to more ballgames as well as divert my eyes anytime the Giants are tangled up in an extra-innings game, especially with the Mets.