August 23, 2013
Alright, so for this edition of Fresh Fitted Friday I thought I'd do another throwback however this time, I want to pay some respect to a ballplayer who hasn't had a lot of time on the field this season: #2, Derek Jeter. I've seen the man do some tremendous things at Yankee Stadium, but I'll always really remember him as a scrappy prospect with the Columbus Clippers. Here's a great baseball card where he's wearing a cap very similar to the one featured here today: 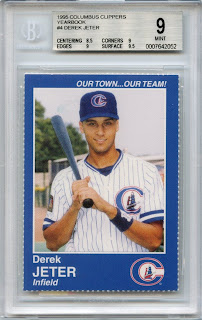 As some of you might know, I grew up in Norfolk, VA and going to Tidewater Tides games at Met Park was an intregal part of many summers in my youth. I remember getting to the ballpark early in the afternoon when the players arrived to scam some autographs and then I'd wait for the guys to leave after the game to get even more autographs. Some of them made some snarky comments here and there, but the beauty of time is that now I can only remember the good memories. I got lots of 'graphs from future Yankees like Mariano Rivera, Jorge Posada, Bernie Williams and last, but certainly not least, Derek Jeter. He was a can't-miss phenom back then but he took the time to sign some baseball cards for baseball-obsessed pre-teens such as myself. I might do another post on other Yankees minor league caps that he wore in his minor league days and include some photos of the cards that the man signed for me, but that's for another time! 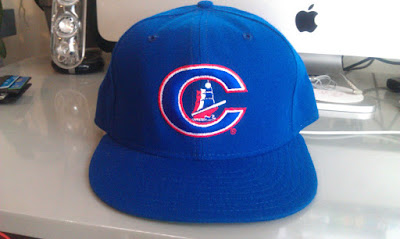 This is one of my favorite caps to wear to a Yankees game, or just anywhere around town really. It's always great when some random stranger shouts, "Columbus Clippers! Nice hat, man!" because it shows that you don't have to wear a Yankees hat to be a fan of the team. It also says that you can have an appreciation for culturally significant ballcaps, no matter what the team's affiliation. It always cracks me up when I get a comment from someone who just sees a blue cap with a "C" on it and shouts, "Cubs Suck" which is a statement I cannot confirm or deny. What I would like to know is, who can protest the awesome Nautical theme of the the Columbus Clippers logo? 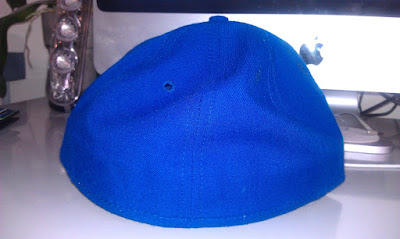 Back to breaking down this cap, you can tell that this cap is from the early part of the 1990's because of the absence of the MILB "batter-man" logo on the rear and the New Era "flag" logo is not present on the wearer's left side. 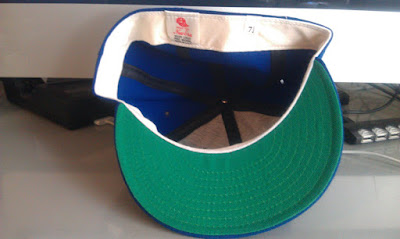 I really enjoy the way the green under-visor plays off the royal blue of the cap's crown and even though it is a tad "Dallas Mavericks-y," I don't mind a bit! 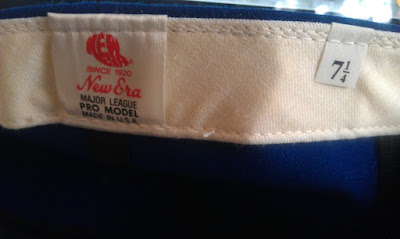 Here you get a better look at the brand and size tags. 7 1/4 is definitely on the snug side for me when it comes to caps that are 100% wool such as this one. 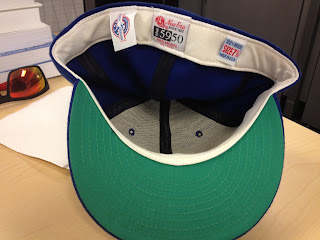 Well look at what we have here: the same cap, albeit in size 7 3/8 which happens to be my normal size in New Era caps from this period. 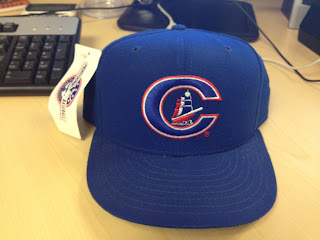 At this point, I'd like to pose the question, what is more fresh than a fitted that still has it's original tags attached? To this, I must reply that the answer is an eternal "nay," friends.

In my eyes the only difference between the two caps exists with the tags on the sweatband. If you know your way around a vintage cap collection then you can tell that these tags are definitely more recent than those of the aforementioned cap. What I dig the most is the tag to the left of the brand tag. It's kind of like a minor league cap's version of the "Authentic Diamond Collection" tag featured on MLB caps. Having it there also reminds me of the freshly popped paper tag that makes Fresh Fitted Friday such a glorious day! I'm really happy to now have this cap in a size that fits me better but I'm even happier to have been able to pick up a second cap in the this size from the same seller. Hollar!

amb1428 said…
Hi. Im interested in seeing your autographed Jeter cards from his days in Columbus. Are you willing to sell any? Please let me know. Thanks! uptown028@msn.com
September 14, 2013 at 8:43 PM

amb1428 said…
Hi. Im interested in seeing your autographed Jeter cards from his days in Columbus. Are you willing to sell any? Please let me know. Thanks! uptown028@msn.com
September 14, 2013 at 8:43 PM