As a current resident of New York City, I can't help but root against the Boston Red Sox. I've been to a fair number of Yankees games since I've lived here and the ridicule that the Yankees' fans bestow upon the Red Sox Nation is a true marvel to observe. It's fair to say that Yankees fans are often described as being "entitled" due to their successes over the past two decades. They are also known to be abrasive in comparison to - and in their treatment toward - their counterparts in Flushing. Mets fans embrace their lovable losers and that's admirable but Yankees fans are not as forgiving of their team. Mets fans have fun at games even if they know that their team's losing record in the season means no chance of making a playoff appearance. Yankees fans have become spoiled to the point that not winning a World Series is unacceptable and not making the postseason spells out disaster. I appreciate the dynamic between Mets fans and Yankees fans but I also wonder what the relationship is like between fans of the Cubs and White Sox in Chicago.

My understanding is the socio-eonomic and geographic emphasis on this rivalry means that the less affluent south-siders are known to support the White Sox while the trendier city inhabitants root for the Cubs. Maybe that's a broad or inaccurate generalization but I've heard that assessment enough times that I've started to believe it to be true.

I do know that overall, the Cubs seem to be the more popular club in Chicago but I have had a certain distaste for this team that goes back to the late 1980's when their day games were broadcasted on WGN I wouldn't get to watch that afternoon's re-run episode of Webster. It's a petty excuse to not like a team but I can't help the fact that Emmanuel Lewis' pseudo-hit show from the 80's was a favorite after school activity of mine!

The other - and more legitimate - reason that I dislike the Cubs is that when I do watch telecasts of their home games it seems like the fans carry on in a party atmosphere that I feel is out of place at a baseball game. The White Sox fans have no real reason to be at the games other than to root for their team but the Cubs fans seem to have a few too many distractions at Wrigley Field and in the surrounding neighborhood. In a word, Cubs games are too "scene" for my taste.

It's too bad that I don't respect the Cubs more because as an organization, they seem to be interested in preserving certain baseball traditions, especially considering how far the White Sox have strayed from that path. The Cubs are the only remaining team that values the day game more than night-ball and in recent seasons they've even gone back to (and then eventually away from) having their players wear jerseys featuring
just the uniform number with no surname on the back. When you think that the White Sox were the first team to put names on the backs of jerseys in 1960 and that since then, they've maintained the record for having the most variety of hideous uniforms, it's hard to find a good reason to actually like them. I'm also more of a National League fan so it makes no sense why I would like a team with a designated hitter more than one where the pitcher bats. I really dislike the way the White Sox have heavily relied on so many gimmicks over the years, but maybe saying that I like them despite it all is all the reason I need to explain my admiration of the team. So In the spirit of liking something that's so ugly that it becomes beautiful, feast on these photos of the cap that the White Sox wore from 1982-86. 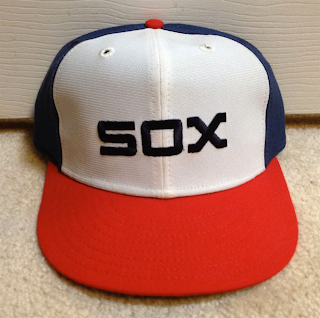 This cap really is garish but hopefully you'll find it charming nonetheless. There is no mention of what material the cap is made of on the inside tags but I'm willing to wager that it's comprised mostly of polyester. 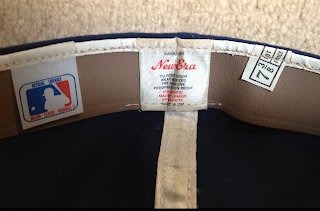 You can see from this view that this cap is from the "leather sweatband era" but I haven't had very many encounters with caps that made of this mystery material that feature both the leather sweatband as well as a grey underbrim. 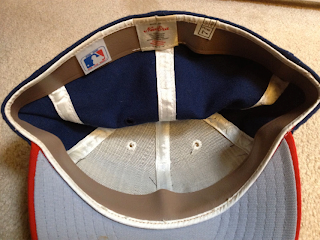 The White Sox decided to wear a reproduction of this cap as part of their throwback alternate uniforms for Sunday home games in 2013. I think that the Sunday alternate uniforms have been well received enough by fans to warrant a a return for next season. My hope is that they'll go with the 1987-1990 cap for 2014! 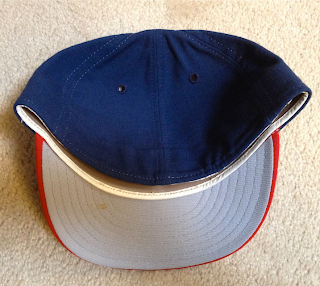 Oh snap! You can tell from a distance that the underbrim is not as fresh as it could be. That's a gnarly little stain under there but it's a good thing the Sox are known for being a down and dirty kinda team. That sort of blemish certainly wouldn't be ok on a Yankees cap! 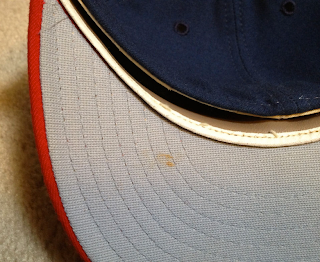 Overall it's a cheesy cap but I associate this cap with bespectacled players of this era such as Ron Kittle and Harold Baines. Funny enough, the last season Baines played for the Sox was in 2001 when they wore the cap that I'm showcasing next. The cap features the same front logo design that the team has worn since 1991 along with a patch commemorating their 100 years as charter members if the American League. I call this style the "NWA" style because of its popularity with the rap groups former members Dr Dre, Ice Cube and Eazy-E. It's also a style that am especially fond of so, doubly good there! 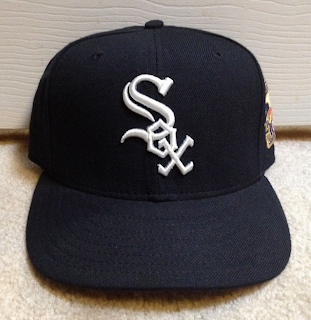 I like checking out the inside of caps that have patches for specific years because it makes it easier to identify what year another cap might be from. And for me that is important for some reason; I'm still trying to figure out why though! 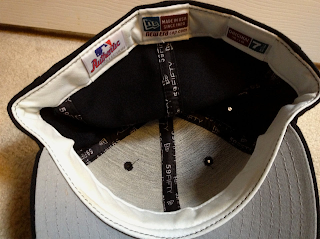 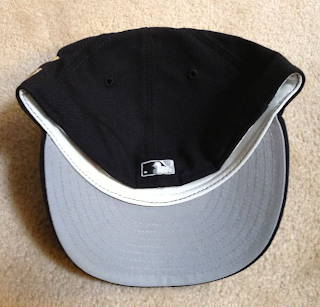 Wow! 100 years sure seems like a long time to be part of something but hey, maybe there are some Elks or Masons out there that think otherwise! Or maybe they agree; who knows? 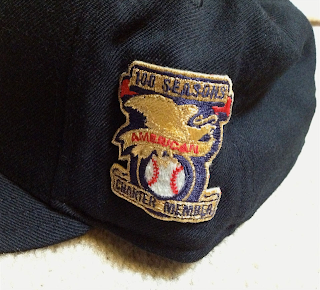 I also like that Frank Thomas wore this cap in 2001 as well. He supplied a major source of power for the team in his career and I wish that he could have played his entire career with the White Sox but I definitely enjoyed having him in the Bay Area when he was with the Oakland A's in 2006 and 2008. 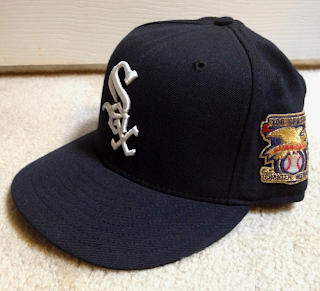 On the subject of the A's, I'm glad they have already gotten knocked out of the postseason because I can't have A's fans trash-talking Giants fans at all. The two clubs who are going to the 2013 World Series will be decided before the weekend is through, which is no doubt exciting news for fans of the four teams playing in these final League Championship Series games. For those baseball fans with no team to cheer for, the only thing to do is hope that you have a team or two to root against. In my case, being a San Francisco Giants fan means that team to root against is the Los Angeles Dodgers. Luckily the Dodgers are only one loss away from elimination but they're also two wins away from going to the World Series. Man, I hope they don't go to the World Series. I hope the Red Sox don't go either. I guess that means I want the World Series to be played by the Detroit Tigers and the St Louis Cardinals. Pretty easy choice to decide which teams to root for during the last two games of LCS then. I suppose that having the Cardinals and Tigers in the World Series means extra commercials for Budweiser and Chrysler, respectively. Way to go, American industries! Play ball!!!