February 13, 2015
This week’s Fresh Fitted is a 2014 Springfield Cardinals Diamond Era cap. This cap was sent to me as a bonus (accidentally?) on one of my recent binge orders and I’m happy they sent it because it’s the first Diamond Era cap in my collection. 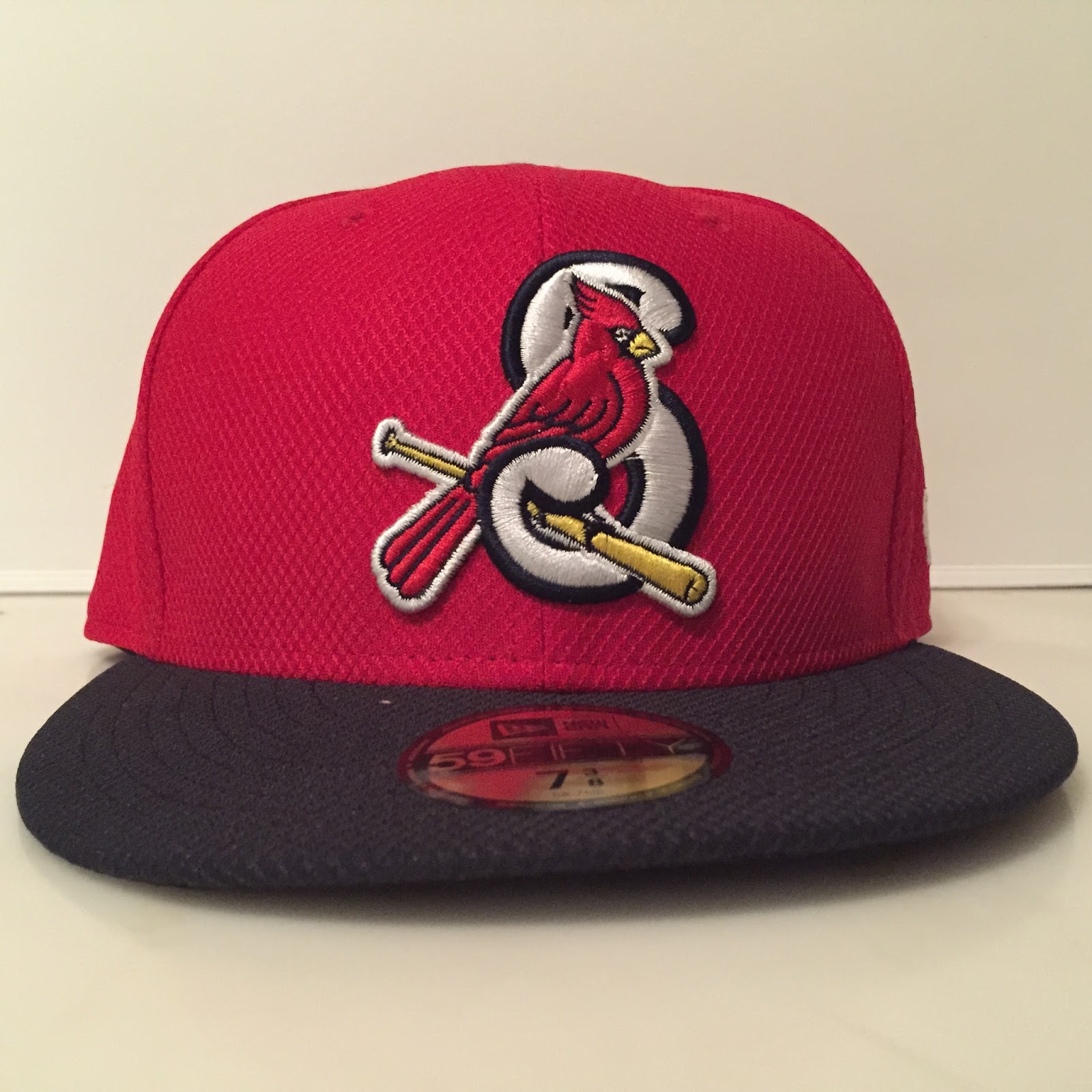 I really enjoy wearing the older “batting practice” caps when partaking in activities (aka exercising, blech!) that require breathable headwear so I think this one should be no different. 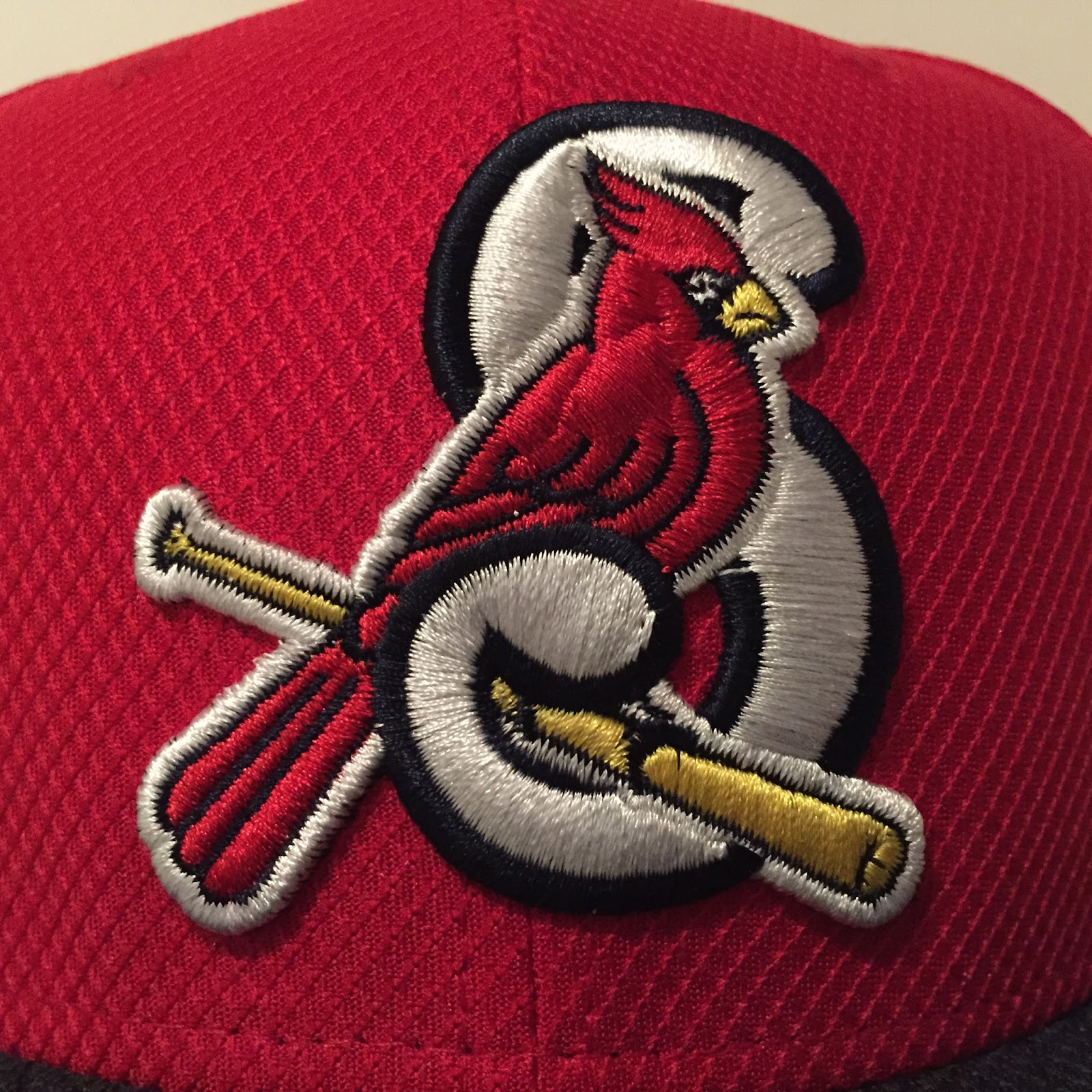 The only problem is that there are lots of Cardinals fans out there and it would be awkward if someone said to me “Go Cards!”and I replied with “Go Giants!” or I could just yell back, "This is an Angry Birds hat, man!" but maybe saying nothing would be worse! 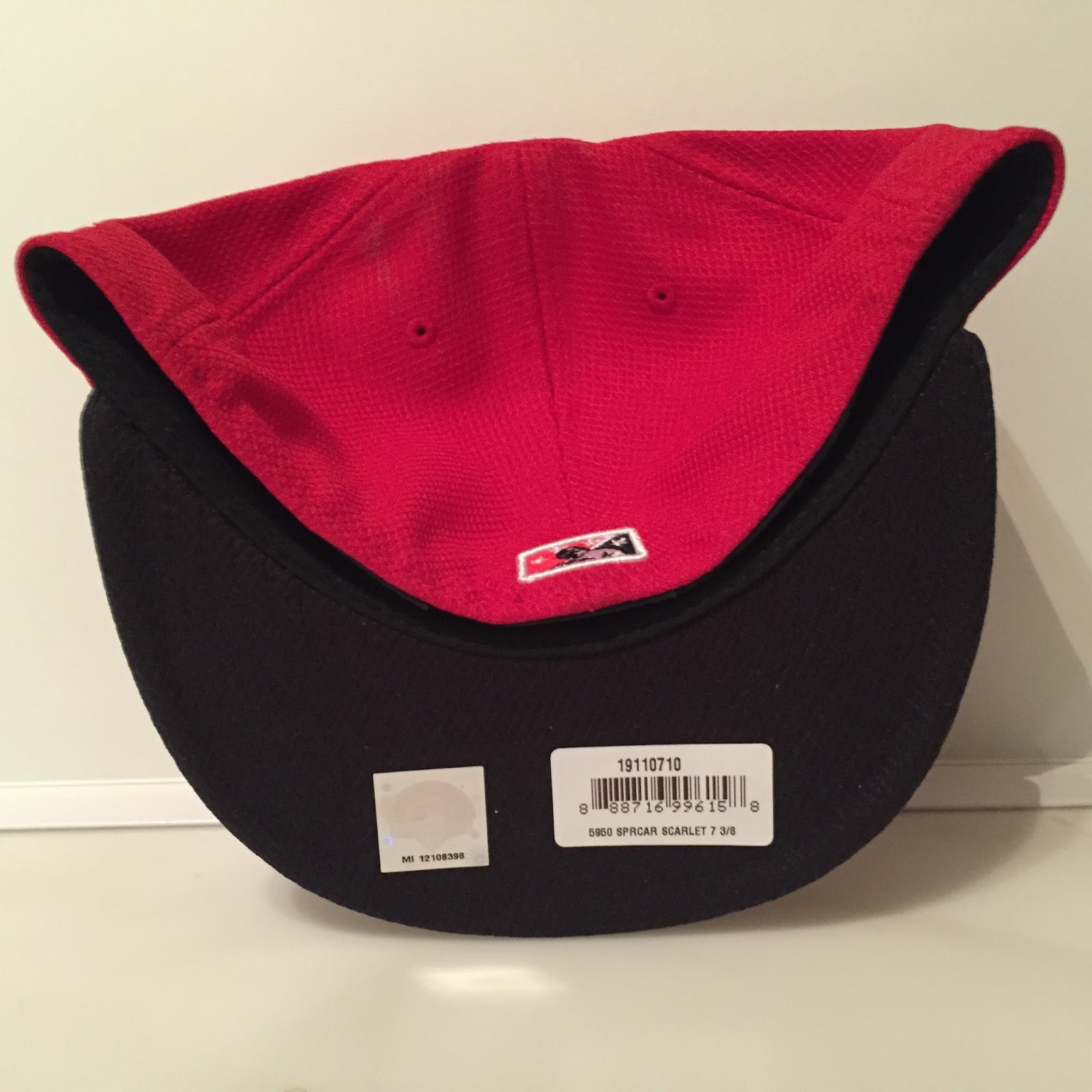 I’m also not too big on red-colored caps but I do feel some security in knowing that on-coming traffic will have an easier time seeing me as opposed to if I was wearing my black San Francisco Giants batting practice cap. 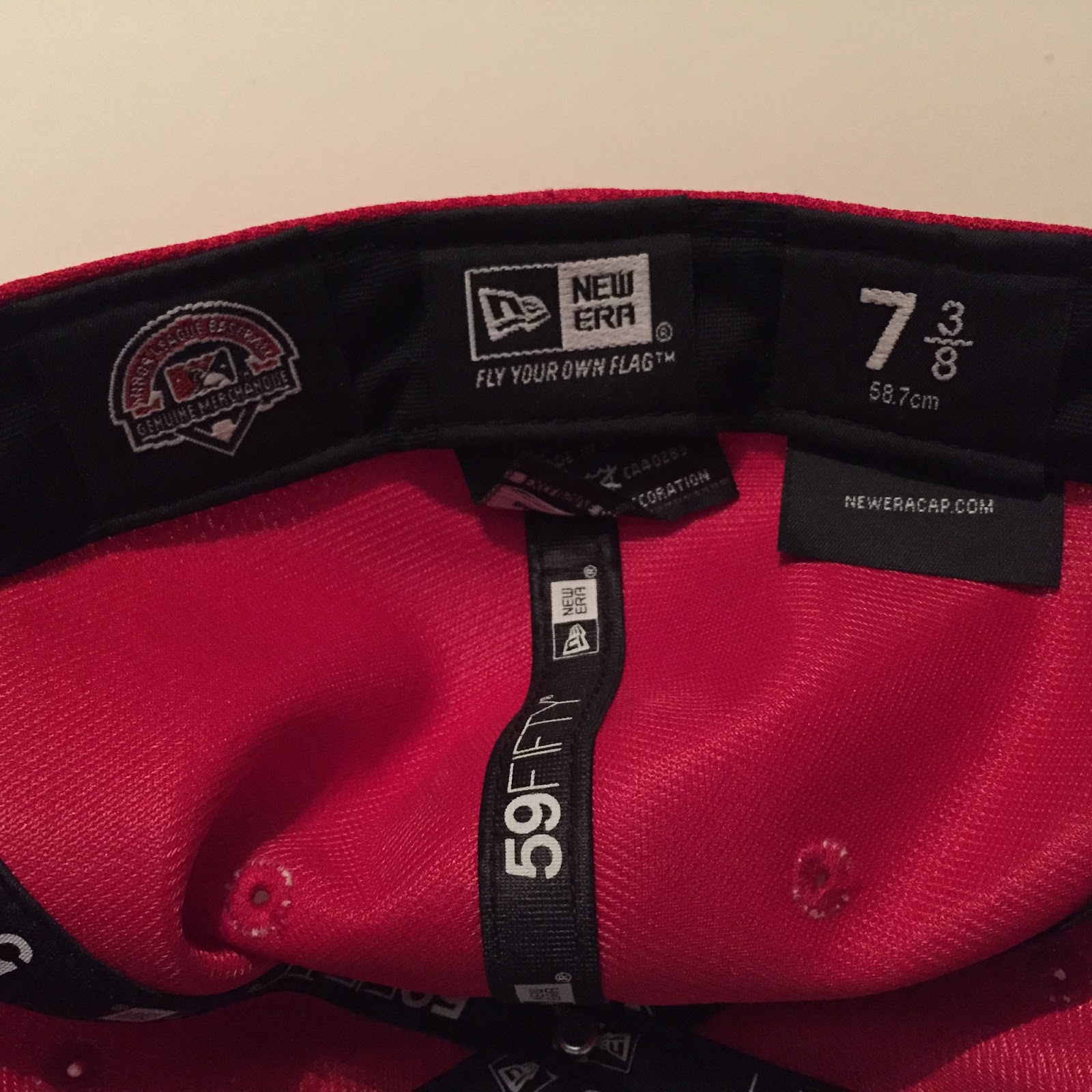 One thing that’s bugging me though is that I’m not sure if the visor is a dark navy blue or if it’s black. I’d guess it's navy but only because that has been more popular on Cardinals caps rather than black. 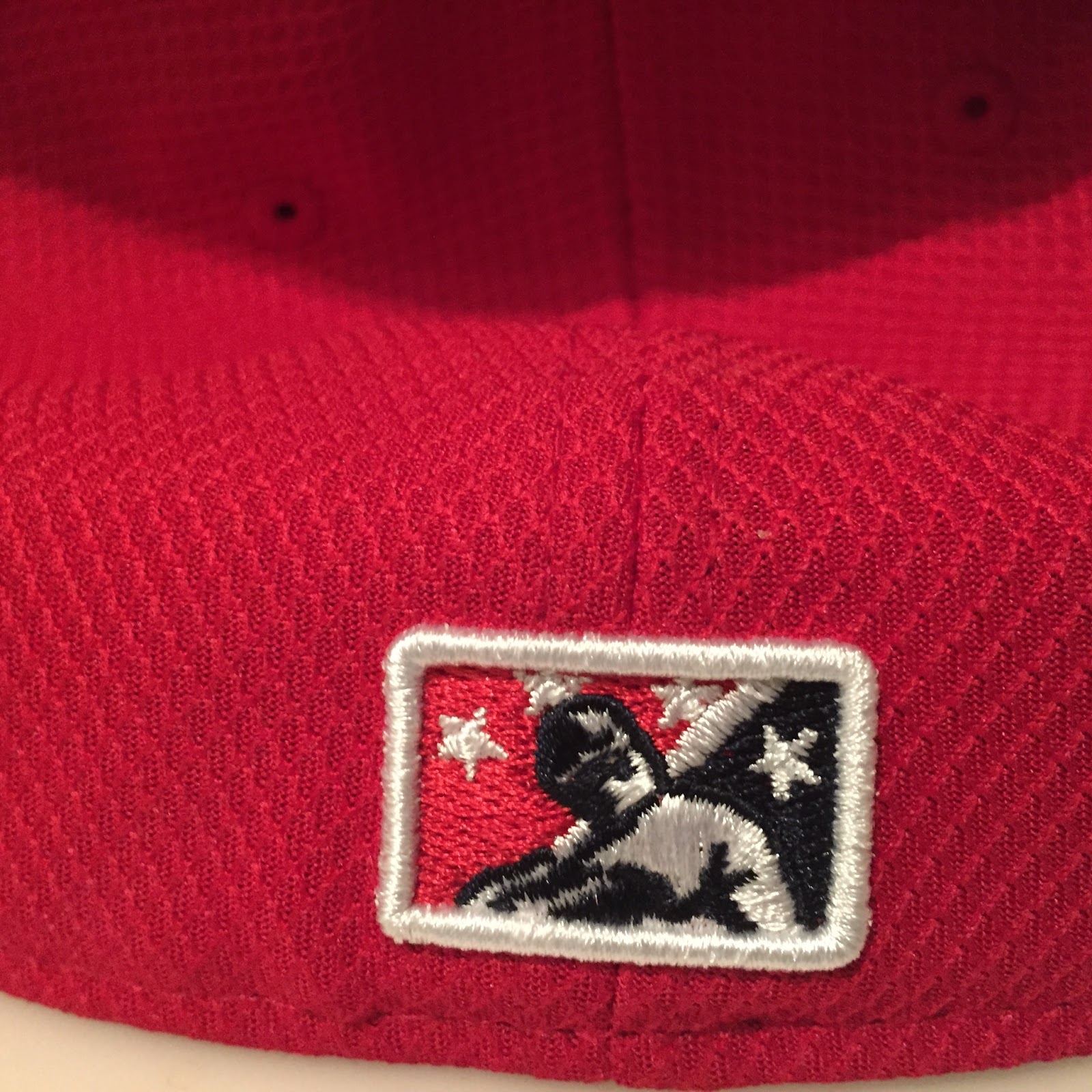 All in all, this is a solid cap to have in my rotation but I think that the real impetus for writing about it today is that the Springfield Cardinals have historically been one of the most prominent teams in minor league baseball. When writing about a new cap, I typically do a fair amount of research on the team to provide a little background on its significance but this time proved more difficult as this team’s geographic location was a continual point of contention. I took into account that the current team has played in Springfield, MO since 2005 but according to Baseball Reference’s current stats, the last time a non-independent league team played there before that was the C-level 1926 Springfield Midgets of the Western Association. The story gets confusing when you consider the fact that there was another team called the Springfield Cardinals that played in Springfield, IL from 1978 until 1993.

Baseball Reference’s page is claiming that the Springfield Cardinals (Midgets, Jobbers, Merchants, Redwings or whatever else you want to call them) says the team represented Springfield, IL yet that it played at White City Park (weird name, I know) which was located in Boonville, MO. It seems that the park hosted the club for the Western Association every season between 1921 and 1942, so it’s probably just a data glitch on Baseball Reference’s side. Another fun fact is that there was a third team called the Springfield Cardinals that played in Springfield, OH in 1941 and 1942. That team was later affiliated with different clubs in other seasons but I thought it was interesting that the Cardinals concurrently had two minor league affiliates in two different cities called Springfield. How Simpsons of them!

Now is the time for a little haterism, so for those unfamiliar with my feelings on baseball it might come as a surprise that I view the St. Louis Cardinals and Los Angeles Dodgers as the summation of every villain that Alan Rickman has played throughout his acting career.  Being a longtime supporter of the San Francisco Giants means that I inherently despise these teams and almost everyone involved with the organizations. However, I'd sooner root for the Cardinals - for which the strong distaste which is really just sheer envy based on their total number of World Series championships - than 'dem bums. Perhaps that's why I feel good about showcasing this Springfield Cardinals cap but would probably never write about (or OWN!!!) a Dodgers hat.

Despite my animosity toward the Cardinals and  Dodgers, there are certain individuals from each organization - that from an objective point of view - will forever remain as the most exemplary names ever associated with Major League Baseball. From the Cardinals side, I instantly think of broadcasting legend Jack Buck as well as Hall of Fame players such as Stan Musial and Bob Gibson.

Without a doubt, the most well-known name associated with the Dodgers organization is Jackie Robinson.  Virtually everyone knows about the adversity that he faced as the first African-American to enter MLB as well as his continual accomplishments after he arrived. After Robinson, the next Dodger great that comes to mind is Vin Scully, who was there to broadcast most of these amazing moments and many more. Just for fun, here’s a fun interview with Scully where he recounts the job interview he endured before Branch Rickey hired him

While the 2013 biopic 42 paid tribute to Robinson’s path to baseball immortality, the film also accurately portrayed Rickey’s legacy as the front-office executive who risked his reputation and more in order to break down racial barriers in the game. An interesting fact about Rickey is that after his time with the Dodgers, he went to work for the Pirates and is credited with bringing Roberto Clemente to Pittsburgh from Puerto Rico. His drafting of the first Afro-Hispanic superstar (that term doesn’t sound very PC, though thanks Wikipedia!) was another groundbreaking milestone in baseball’s desegregation. On top of that, during his employment with the Cardinals from 1919 until 1942, Rickey was also instrumental in the creation of the modern day player development format of the minor leagues.

Just when you thought Rickey had done so much for the Cardinals (and baseball overall) is probably when you should find out that he had also had a crucial role in the design of the artwork featured on their uniforms!

I’d say based on just those accomplishments that Rickey lived a pretty full life but I didn’t even tell you about so many of the other great things he did in his lifetime - like creating the modern day batting helmet - sorry I couldn’t resist. I hope you enjoyed this post on a guy who’s worked for the two franchises I enjoy the least. I guess the fact that I spent so much time discussing teams I am not fond of speaks volumes about the amount of respect I have for the man and what this cap represents!