By this time next week, the 2020 World Series will have wrapped up and it's only fitting that the last Fresh Fitted Friday of this year's baseball season should also be the conclusion of the Orange October series that I've been running over the last few weeks.

To say the circumstances of this year's World Series are unprecedented would be the biggest baseball-related understatement of the decade but it's still important to take a moment to recognize the significance this year's matchup plays in the overall history of the Fall Classic.

Except for a very small (and fortunate) percentage of the baseball fan population, watching the World Series is almost always something that you watch on your TV at home and most times it's between two teams who are not that important to you. But this year, only one of things is true in my case!

As a San Francisco Giants fan, my only desired outcome regarding this series is for the Los Angeles Dodgers to lose to the Tampa Bay Rays. I recognize my Schadenfreude is petty and lacking in sportsmanship this sounds but it's true. I don't want to jinx anything now––even though I probably just did by saying that, but here goes: I feel like history is on my side in this!

Despite having won the West Division title every year since 2013, and this being their third trip to the World Series over the last four years, Los Angeles has not won it all since 1988. The Dodgers are the best at being a great team that also loses when it really counts. I need that to keep happening for the sake of my sanity, especially considering how awful this year has been.

Baseball is a crazy and unpredictable sport where a team's will to win factors heavily in how a  World Series plays out. This year, the Rays and Dodgers both seem to have the drive and talent needed to win so there's no clear and obvious outcome of how this plays out.

One thing I do know is that if Dodgers win it all this year, it's going to make it very difficult to celebrate the 10th anniversary of the Giants winning the Series in 2010. So before that happens and 2020 gets even worse, I decided today is the day where I showcase one of the most beloved caps in my collection: the one worn by the Giants when they won it all in 2010! 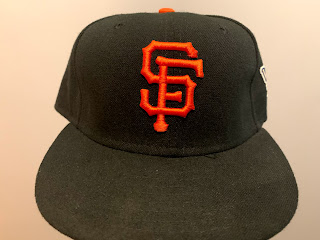 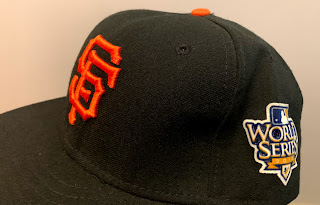 I remember ordering this cap the day after the Giants clinched the pennant, which as it happens was ten years ago on this day, October 23, 2010. At that point, I had only been living in New York for a few months since moving here from the Bay Area so this hat definitely did a lot to assuage my homesickness. 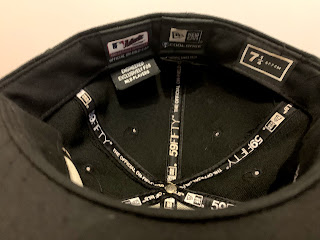 Looking at the inside of this cap, I'm remembering how disappointed I was that New Era made the switch in 2007 to the black sweatband and underbrim. My feelings were so strong on that point that I toyed with the idea of removing the World Series patch and putting it on a pre-2007 cap. I'm glad I didn't do that. 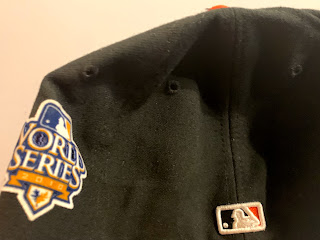 I credit the acquisition of this cap to my rekindled obsession with baseball hats and to be frank, this blog might have ever existed had it not been for the the Giants 2010 season. I wear this cap sparingly nowadays as I'd like to keep it in good shape for at least another decade or two. I'm also hoping that the Giants make it to (and win a few more) World Series in that time as well.

I've had fun over the last few weeks making tie-ins between the Giants franchise and the teams in the 2020 MLB postseason over the past few weeks but one thing just that dawned on me this week is that the designated site for this year's NLCS and World Series is Globe Life Stadium, which is the Texas Rangers brand new ballpark in Arlington, TX.

This all comes back to 2010 again as the last three games of that year's World Series were played at Rangers Ballpark in Arlington. Another connection there is that during that year's ALDS, the Rangers defeated Tampa Bay on their way to the World Series but interestingly enough, Tampa won both games that were played during that series in Arlington.

I'm hoping the Rays can channel some of that good Texas energy from the past for the five remaining games of this year's World Series but if they don't then that's going to have to be ok. I'm truly glad that we were able to muster up a baseball season in this absolute clown-show of a year but the one thing that could make it even better would be for the Dodgers to go home empty handed!