September 27, 2013
It happens every year around this time. As baseball's regular season comes to a close, I can't help but feel sadness when the San Francisco Giants don't make it to the postseason. It's happened a lot over the years so you'd think I'd be used to it by now but it never gets easier. Even after two World Series wins in three years, I'm finding that this year stings especially hard because not only did the Giants finish poorly but the Los Angeles Dodgers are West Division champions. It's hard to write that, and it's even harder to read. In times like these I have to cheer myself (and hopefully some other distraught Giants fans out there) up with a vintage cap from a former Giants minor league affiliate.


I was lucky enough to scoop-up this Shreveport Captains cap on eBay for a great deal a little while back.  I am still on the lookout for backups but every time i see a new listing for one it's some ass-clown trying to get anywhere from $50 to $100 for it. Hopefully if you have one of these caps to sell, you will try not to gouge your buyers. If you do, well then I hope you sit on that $100 hat for eternity. I know for a fact that this cap has been sitting on some shelf for a very long time (or it was left out in direct sunlight) because the brim had a  New Era "tan line" when I removed the sticker. I don't know if it gets any fresher than that! 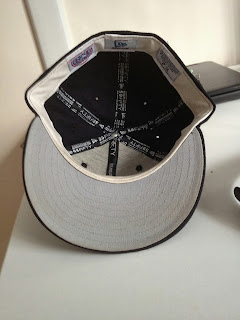 The inside of this cap has a lot going on but a lot of it,  I don't like. The "New Era" lining across the cap's panels has that "all-over" pattern that I'm not crazy about. You can take an even closer look at what I'm talking about in this photo: 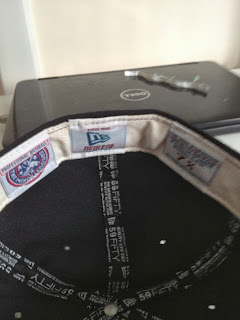 These particular brand and size tags weren't used but for a few years and I'm not angry about that. I'm not in love with those either. I bet you're wondering if I even like this cap, and the answer to that is a resounding "Yes!" but is it so wrong that the inside of the cap isn't where the magic happens for me?


The MILB "batterman" embroidery on the back of the cap is something I do enjoy about this cap. While I typically prefer the "flat" no-logo look, the MILB logo here will hopefully at least alert folks that are knowledgeable about caps that it's a minor league cap even if they don't recognize the logo on the front. I recently wore an older version of this cap to a Cardinals-Dodgers game at Dodger Stadium and the sleazy parking lot attendant tried to heckle me because he thought it was a Cardinals cap. I didn't want to incite a pre-game brawl in the enemy's parking lot but I did have a little chuckle to myself thinking how great it was that in a way I wore a Giants cap to Dodger Stadium and no one got the reference. Plus one for esotericism! 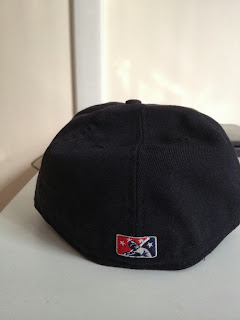 I was trying to find a good photo of some former Giants greats who donned this cap and I had a tough time getting meaningful results. The Giants definitely didn't have the deepest farm system when the Captains were the Giants' Double-A affiliate, but there have been at least a few future stars that have played wearing this cap over the years. It might not be very widely known but Jason Grilli began his professional career in the Giants organization. You can draw your own conclusions regarding whether or not he met any expectations that the Giants had set when they drafted Grilli in the 1st round (4th overall) of the 1997 draft. However if you look at his 2013 statistics, it's clear that Grilli turned things around for himself as Pittsburgh's main closer in their first winning season in 20 years. I always think it's remarkable when a player with a high initial hopes endures many years of mediocre results and then turns a corner as his career matures. It's even sweeter when his team enjoys successes that haven't happened for far too long as well. Even though the Giants turned in a lackluster season, that cannot stop me from offering salutations to the Pirates and their journeyed closer. Cin Cin, Grilli!