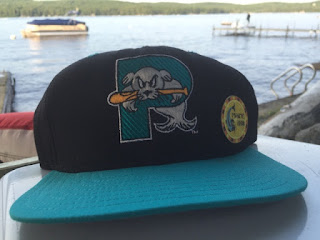 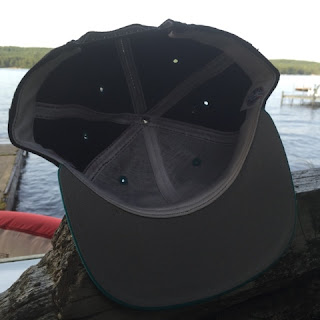 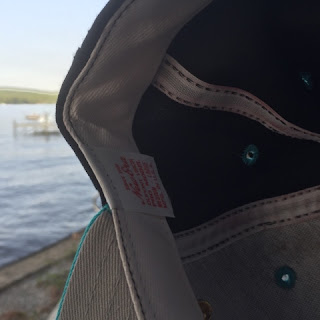 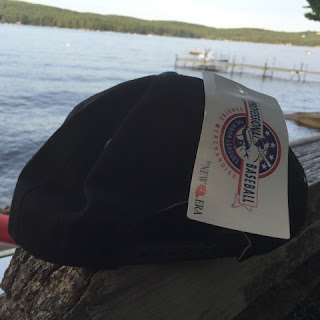 I know that I sang the praises of a sweet SnapBack just last week however, this Portland Sea Dogs cap from 1999 is Fresh enough to garner serious attention from you kids.

I got a hold of this cap a few months ago and have been waiting all this time for just the right moment to share it with y'all. I figured because I am visiting Maine for the first time in over 15 years that this is that time!

There is one problem though; I'm not quite sure how crazy I am about this cap logo...

Those adorable logos of imaginary animals with two word names are usually created ad hoc, usually via fan voting. I suppose my main issue with these team names is that I believe every team's region has some sort of regional aspect (wildlife or not) that could be used rather than some ficticious smiling beast. If it has to be smiling and indigenous, well then look no further than the Montgomery Biscuits, friends!

While the Sea Dogs team name and logo feature the very characteristics that I typically dislike, I suppose they get a pass because they were at the forefront of this bizarre naming convention boom of the mid 1990's. Also, upon closer inspection the creature on the team's cap logo is in fact more ornery than the adorable ones of their opponents!

The New Haven Ravens (awesome name btw) and Portland Sea Dogs both entered the Eastern League in 1994 as the Double-A affiliates for the Colorado Rockies and the Florida Marlins, respectively. While Sea Dogs have stayed put in Portland, the Ravens rebranded as the New Hampshire Fisher Cats (doesn't flow off the tongue as easily as the old name does it?) moved from New Haven, Connecticut to Manchester, New Hampshire in 2004.

The Sea Dogs might have only been around for about twenty years but they have already produced a healthy amount of future MLB players in that time. A.J. Burnett and Adrian Gonzalez had some playing time in Portland when they were Marlins prospects and former Red Sox stars Jacoby Ellsbury and Jon Lester spent time were Sea Dogs when they were w farm team for Boston.

There are plenty more former major leaguers from the Marlins and and Red Sox who are former Sea Dogs but the most interesting of all is a former Marlins prospect who is now a member of the Red Sox: current left-fielder Hanley Ramierez.

The possibility that this oft-injured superstar might one day play a game (or stint) in Portland as part of a rehabilitation assignment for his current team is almost too much for me to handle!

To combat these emotions I will eat gratuitous amounts of lobster rolls at a fast-food restaurant that is currently serving them for $8 each. If you are celebrating the 4th of July, well then have a Happy Independence Day!

I've got an emotional connection with this cap and because it's a snapback, it's just my size and it is not going on the Trading Block but please don't hesitate to reach out if you want any other cap from that list and you are willing to part with any of the caps on my Wish List.


As always, thanks for coming back to read about minor league baseball hat geekery. I have comments disabled here so if you'd like to get in touch with me regarding a trade or just to chat about hats, feel free to reach out via the following social sites:


As always, thanks for coming back to read about minor league baseball hat geekery. I have comments disabled here so if you'd like to get in touch with me regarding a trade or just to chat about hats, feel free to reach out via the following social sites: