September 20, 2019
Now that I've apparently run out of Texas League hats, it's time to move on to another theme. Because I always seem to have fun with Double-A teams, I think it makes sense to write about some Southern League caps that I've had waiting in the wings and I'm kicking things off with the Montgomery Biscuits home hat.

Surprisingly enough, I've only recently come around on the Biscuits logo. I suppose that's because it seemed like just another silly logo when I first saw it but over time I've grown to appreciate its worth. Biscuits are delicious and fun and if you have a problem enjoying delicious things and having fun then you probably don't love minor league baseball.

That might seem like a harsh judgement but I feel the need to pump up these newer logos rather than trying to capture the past which is what I'm essentially doing when waxing nostalgic on the seemingly endless stream of retro and vintage caps out there.

Case in point: the Biscuits have rocked this cap since the team's inaugural season in 2004 and this logo continues to excite fans after all these years.  Before the team moved to Montgomery, the franchise was based in Orlando, which despite being a Top 20 Media Market in the US, failed to draw the attendance needed to keep the team in town.

Nevertheless, the sheer amount of people that lose their mind over the vintage Orlando hats is at fever pitch. I've previously written about the Orlando Sun Rays/SunRays caps, yet I'm still eluded by the Orlando Rays cap from when their time as a Tampa Bay Devil Rays affiliate from 1997-2003, as seen below. 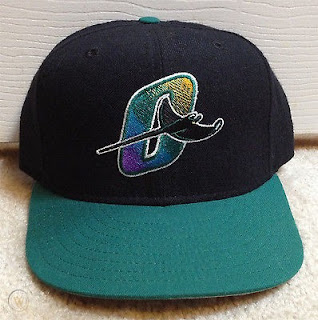 I was ultimately outbid on this hat in a recent auction and truth be told, I'm not that bidder (bad pun, sorry) about it. I'll be more than happy to pick up a retro release when HatClub decides it's time to produce one and I'll just go on believing that the "O" on this cap stands for "outbid" until then.


Last week I apologized for ending on a sad note so this week I'll ask you to forgive me for ending with a surly tone. I'm still very much stoked on vintage caps but I think I just happen to have a bad taste in my mouth because this Orlando Twins cap isn't the only one that "got away" recently. At any rate, onward and upward!