June 11, 2021
Things are heating up around the country and for folks in the midwest, (I think) that means one thing: it's time for some corn, folks! Today is National Corn on the Cob Day and I really have no choice but to show love to the corn on this week's post.
My all-time favorite corn-tinged team is the Cedar Rapids Kernels and I've written about two of their most famous logos (both times in the summer months no less) but this time I've got a special treat for y'all as this week's cap is the "Elotes" logo that the Clinton LumberKings have donned since 2019 as part of the Copa de la Diversion campaign. 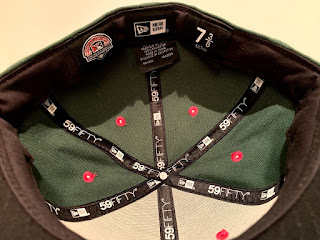 I really dig this concept but I'm not sure how I feel about the toppings smattered across this guy's face and the grimaced smile isn't giving off the friendly vibes that I expect from sweet corn. To rectify this, maybe Clinton can change the identity to be esquites for version 2.0 of the Copa.
For those unfamiliar with this delicious Mexican corn salad, it's essentially all of the elotes' goodies combined with kernels that are cut off the cob. This makes esquites safer to eat as you are less likely to chip a tooth but it's dangerous in the sense that it's extremely easy to inhale a quart of the stuff since you don't have the cob to slow you down. Pick your poison, amigos!
At any rate, I think the esquites variation might be a fun idea for the team to consider and since the dish is usually served in a bowl or cup, it would be pretty straightforward transition to use the round outline of the corn to be the shape a baseball and have the the chili powder as the seams.
And if they absolutely have to make a face, they could start by using the lime wedge as its mouth! Ok, I think I might have gone too far but you get my drift right? The Copa is so much fun so hopefully teams aren't afraid to experiment a bit more as the campaign progresses over the next few years.
This week's Fresh Fitted Friday selection is not going on the Trading Block however please don't hesitate to reach out if you want any other cap from that list and you are willing to part with any of the hats on my Wish List.