April 05, 2019
Y'all know how much I love these little "mini-series within a series" things so brace yourselves for the second part of the Columbus RedStixx celebration within the greater South Atlantic League jubilee! To celebrate this meta-gala proper, I'll be popping the tags on a cap that is about 25 years old! 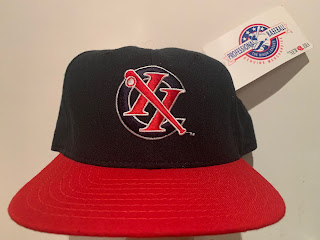 This week's cap is special because it's the logo I remember most from my time as a minor league baseball fanatic in the mid-1990's. The RedStixx wore this one from their inaugural season in 1992 through 1994 but possibly up until 1997. For some reason MILB cards from seemed to become more scarce as the decade progressed. 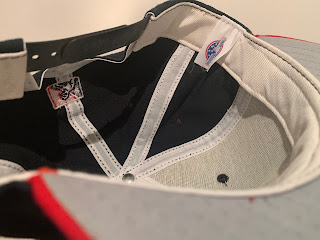 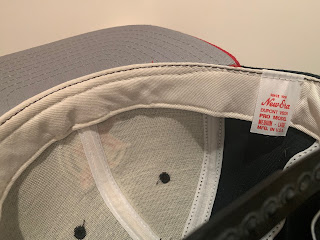 The sweatband tags here are standard issue for the mid-1990's but the white satin taping has inspired me to create a new label that I'll be applying to previous posts as needed.


The MILB batterman on the back of the cap here tells me this one's from 1994 at the earliest and the last year it could be from is 1996 if you consider the lack of the New Era flag tag on the sweatband.

In closing, I'd like to mention that I'll also be going back through old posts to make edits on posts where I said that the MILB batterman began to appear on caps in 1995. I've found enough photo and video evidence to prove that claim to be false so I need to make that right.

As a token to gain your mercy, here's video from Game 2 of the 1994 Governors' Cup featuring the Syracuse Chiefs and the Richmond Braves. Because of the MLB strike that season, the International League championship series had enough gravitas to be broadcast on ESPN and it even featured announcing from Jon Miller!

I've got somewhat of an emotional connection with this cap and because it's a snapback, it's just my size so it is not going on the Trading Block but please don't hesitate to reach out if you want any other cap from that list and you are willing to part with any of the caps on my Wish List.

As always, thanks for coming back to read about baseball hat geekery and please feel free to reach out via any of the following social sites: