April 12, 2019
Unlike the cap shortage that I faced in my Carolina League series a while back, I don't seem to be running out of ammo when it comes to my South Atlantic League reserves. This week's Fresh Fitted Friday selection is a hat that's been stashed away for a few years now but the cap logo design itself goes all the back to 1993. 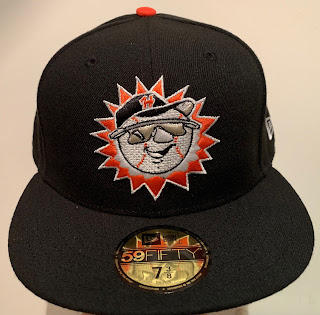 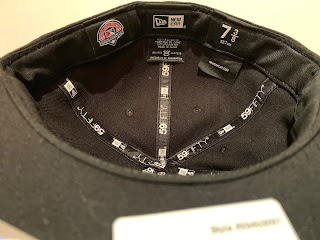 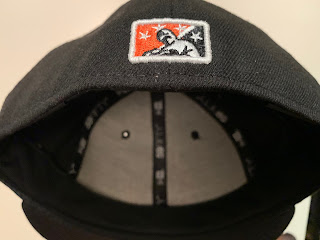 I've mentioned this many times before but it's worth repeating that I loved collecting players' autographs as a kid. To maximize my collection, I had to stock up on cards from as many different minor league teams as possible and I focused on MLB teams who had a Triple-A affiliate in the International League who would face my hometown Norfolk Tides.

The Tides often played the Rochester Red Wings (who were the Baltimore Orioles' Triple-A affiliate) and I had lots of cards from that team as well as other current and former Orioles farm teams such as the Frederick Keys and Bowie Baysox, who replaced the Hagerstown Suns as the Orioles Double-A affiliate in 1993.

That season's Suns team was the first to wear the design featured on this week's cap although to match their new parent affiliate Toronto Blue Jays, their cap was blue with a white baseball on a red sunburst logo rather than the all black cap with a white baseball in an orange sunburst that I'm featuring today.

The orange and black uniform was introduced in 2000 when the Suns became the Double-A affiliate for the San Francisco Giants. For the first time in 8 years, the players and fans in Hagerstown were back to wearing a familiar colorway reminiscent of their Orioles years and continued to do so even after the team was no longer affiliated with the Giants.

Like someone afflicted with phantom limb syndrome, the Suns stuck with the orange and black until the 2013 season when they accepted their fate and adopted the uniform colors of the Washington Nationals, who became their parent team in 2007.

The team must have been prepping for doomsday because as of this writing, you are still able to purchase the black cap as new from many different retailers (as I recently did) which makes me wonder if the Suns occasionally wear this version of the cap. If anyone out there can confirm this, I'd be much appreciative to find out more!

This cap isn't hard to come by so there's no need to dangle it about as bait like the others on the Trading Block please don't hesitate to reach out if you want any other cap from there and you are willing to part with any of the following hats on my Wish List.

As always, thanks for coming back to read about baseball hat geekery and please feel free to reach out via any of the following social sites: