August 09, 2019
I've had a good time covering caps of classic New York-Penn League from current teams over the past few weeks but I'm switching gears for this week's Fresh Fitted Friday by paying tribute to a classic yet now defunct team: the Jamestown Jammers. 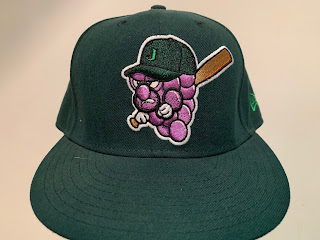 I've mentioned this before but I used to work in the food and wine industry so I've got a special connection to grapes, which is a big reason I'm drawn to this cap. The image used for this cap logo is of Bubba Grape, which is the mascot the team used for Jammers 2.0, an era that spanned from 2006 through the team's final season in 2014.

This cap could be from anywhere in between that time frame but you can cancel out 2006 through 2008 because the team wore wool caps with grey underbrims those seasons. 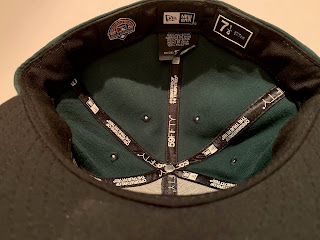 I'd say you could also negate the last few years of the Jammers 2.0 era because the satin taping as seen above features the "Originators of the True Fitted" text and as I discussed in my write-up for the 2008 Fort Myers Miracle cap, I haven't ever seen that featured on caps produced after 2010.

I had difficulties assigning exact years to the Jupiter Hammerheads, Colorado Springs SkySox, and Beloit Snappers, and Lehigh Valley IronPigs caps, but if I had to guess they're all pre-2010 as well. Another item of note is none of the aforementioned caps nor this week's cap feature the "Fly Your Own Flag" text on the New Era tag, which is something I've only seen on post-2011 hats. 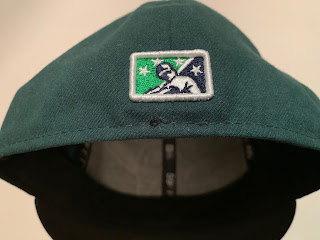 And now for some history: the city of Jamestown, NY has consistently hosted professional baseball teams in the New York-Penn League since the league's inception in 1890 as well as its various iterations since then and my favorite team name being the Jamestown Jamestowns. Very inventive moniker but I think I'm intrigued by the possibility of the Jamestown Johns.

Another reason why I chose to write about this Jammers cap is because the name "Jamestown" makes me think of Jim James of My Morning Jacket, who I will be seeing in concert tonight and tomorrow night. For those of you who haven't seen My Morning Jacket before,  I highly recommend seeing them or even a Jim James solo show if you can.

One last thing I'd like to mention is that the Jammers 1.0 cap is an all-red cap that I own but haven't featured on the blog yet as I'm likely not going to wear it any time soon due to my current aversion to red hats. I did however recently find this mostly white pinstriped version and am thinking of pulling the trigger on it.

At size 7 1/4, this week's hat is a little snug but I'm still going to have a hard time putting it on the Trading Block because of I love the logo so much, however please don't hesitate to reach out if you want any other cap from there and you are willing to part with any of the following hats on my Wish List.