February 22, 2019
Welp I ran out of Carolina League teams to show y'all but that's not shocking considering it's a small league after all. Until 2016 there were only eight teams in the Carolina League and I've already written about six (seven including last week's Winston-Salem Spirits cap) of the cities with current teams, as well as the Durham Bulls who are no longer in the league.

As for the other cities (both former and current) in the league, there isn't a hat that I've felt the a strong enough need to obtain about besides, of course, the crown jewel of my Carolina League collection: the Peninsula Pilots. 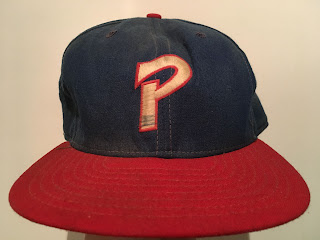 Objectively, the logo is nothing special and could easily be confused with a Detroit Pistons hat. In fact, the only other Pilots hat that I ever found was mislabeled as a Pistons hat in an eBay listing. Unfortunately, the seller removed the item before I had a chance to bid on it and for that reason I feel extra fortunate that I found this beater a few years later. 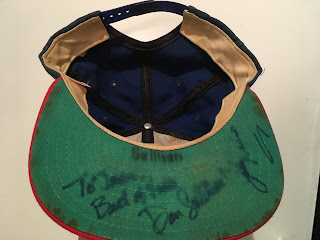 Now, I'm not usually the the type to get excited about autographed memorabilia where I did not obtain the signature myself but this cap is signed by Dan Sullivan, who pitched for the Pilots in 1992 which means... I'm super-stoked because I know for sure this cap is from 1992! The other signature I'm unsure about but it might be John Cummings. 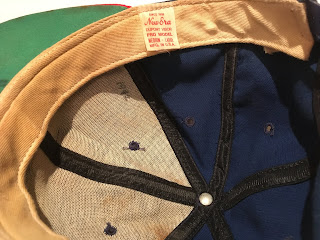 Honesty check: this cap has been worn to hell. I'll probably rarely wear it but I needed to write about it because I have some fond memories of attending some Pilots games at War Memorial Stadium in Hampton, VA. That ballpark wasn't as easy for me to get to as where the Tidewater Tides played but that makes those few experiences even more special. 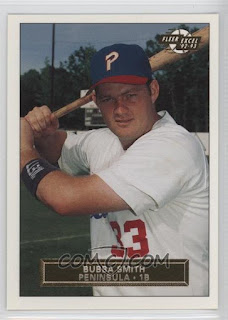 The image above is of one Charles "Bubba" Smith who was a Seattle Mariners prospect who never reached the majors but will always hold a place in Carolina League lore for mashing 32 homers on his way to being the league's MVP as a member of the 1992 Pilots team.

Bubba struggled the following season with Seattle's Double-A Jacksonville Suns and was traded the Cincinnati Reds who had him start the season with their Carolina League affiliate, the Winston-Salem Spirit where he hit 27 home-runs. His performance earned him MVP honors once again and is the only player with consecutive MVP awards in the Carolina League.

One thing that I didn't pay attention to back then which I notice now is that there were a fair amount of Mariners affiliates in the early 1990's that had blue and red caps. So far I've written about the Pilots and the Calgary Cannons so I definitely need to get my hands on a classic Jacksonville Suns cap next! 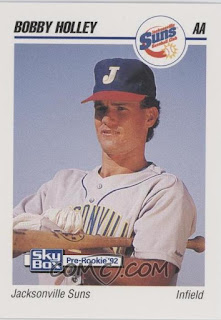 I missed my chance at another version of this cap when Hat Club did a retro release a while back so I'm hoping they see this post and decide to reproduce this one and the Peninsula Pilots cap as well. I'm not sure if the logo is well-known enough to garner the treatment but reading this article on the Pilots from Lookout Landing should convince just about anyone of their classic status.

Even though this cap is on its last legs, the nostalgia is real for me with this one so it's definitely not going on the Trading Block but please don't hesitate to reach out if you want any other cap from that list and you are willing to part with any of the caps on my Wish List.